幻影 translates as "phantom" or "illusion." Alludes to afterimage created from hyper-fast movement.

Miria's datasheet names and describes the technique.[10] In the VIZ Media translation, the Paburo awakened mentions Miria's nickname, "Phantom," in Scene 28.[11] But only in Scene 58 does Clare actually name the technique,[12] as she does in other translations. 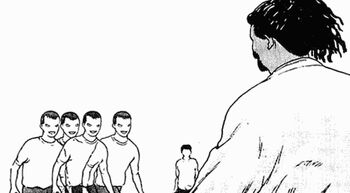 In flashback, Ermita notes new Miria's technique. He tells Ophelia that Miria will be promoted to single-digit status.[21]

During the Paburo hunt, Miria's companions are lying wounded. She recovers everyone.[22] 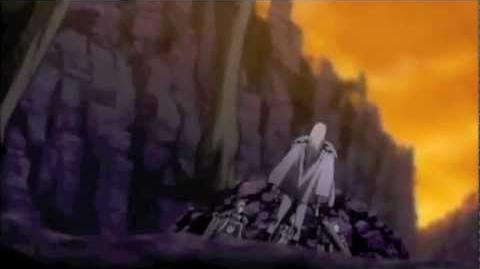 The Paburo awakened cannot score a hit with his tentacles. He can only strike mirages.[23]

But he suspects that Miria has limits. After 30 Phantom moves, Miria fatigues her Yoma energy and he finally pins her down.[24]

The Northern Army invades Pieta, but inexplicably retreats. The Rigaldo sequence is similar to the manga.[28]

Raki gallops to Pieta, followed by Priscilla. In an alleyway, she awakens and Clare gives chase. Miria leads Deneve and Helen to volcano, where Clare and Priscilla fight.[29]

During the 7-year timeskip Miria develops a Yoma powerless replacement, the New Phantom, to avoid Yoma power release that would reveal her presence to Organization.[31]

In deserted village, Clare finds evidence that Raki may be alive. Back at cavern hideout, she announces her intent to go south. Miria tests Clare's fighting ability with New Phantom. Satisfied, Miria says she will accompany Clare. But everyone decides to go en masse.[32]

Miria sees her opportunity to attack the Organization—alone. To prevent Tabitha from following, Miria paralyzes Tabitha. Then puts on her old uniform and sets out for Sutafu.[36]

At Headquarters, Miria disables most warriors, as she did Tabitha. But ends up fighting the Twin Trainees with similar Controlled Awakening as Alicia and Beth.[37]

Later, as the Rebellion begins, Miria reappears to lead the rebels.[39]

The reanimated warriors instantly cut down the rebels en masse.[42]

Miria ends up fighting "Elegant" Hysteria. Miria discovers that Hysteria uses a technique similar to the Phantom. But where Miria gains distance from attacks, leaving behind afterimages, Hysteria makes passing attacks, her afterimage flowing through target.[43]

Miria reverts back to old Phantom, plus partial awakening.[44]

Miria barely survives each strike from Hysteria. Finally, Miria increases her baseline Yoma power to the Phantom's burst level, then jumps it from there.[45]

Miria can now strike Hysteria, even though she also sustains wounds. Hysteria is appalled at this crude technique.[46]