"Paburo awakened" is an abridgement of パブロ山の男の覚醒者 (The Paburo mountain man awakened being),[6] which is actually a descriptive sentence rather than a true proper name.

FUNimation DVD booklet refers to the character as a "Yoma."[7]

He appears 20ish in age. Wears short brown hair and a beard. He has brown eyes in the anime. When meeting the Paburo hunt on the canyon terrace, he wears a headscarf and vambraces on his forearms. He also carries a rucksack and travel bag. 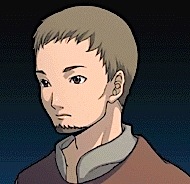 Giant 8-limbed entity. The major two limbs on which Paburo stands have human-like buttocks. Resembles a cross between a praying mantis and spider.

One of the few warriors from the Inital Male Era that still works for the Organization. Acts as executioner of unwanted Claymore warriors. Method of contact with Organization unknown. Has full access to all pertinent information on personnel to be eliminated, as in the case of Miria.

Paburo is brash and over-confident from previous success of killing warriors.

Early life unknown. The Paburo awakened specifically states that he is a former male Claymore warrior, as does his datasheet from the "Yoma War Record."[9] In a major lapse in the storyline, it is later implied that that Paburo was originally a civilian and was never a Claymore warrior.[10]

Paburo is a Claymore warrior of Initial Male Era. [11] Due to a major hole in the Claymore storyline, he is confused with the Yoma-entities created by the Organization in later years, which uses ordinary human males, resulting in relatively weak awakened beings. Helen even says after the rescue of Anastasia's hunt that she never saw an awakened male Claymore warrior, despite fighting both Rigaldo and Isley.[12]

In Paburo Mountains, Paburo hunt is met by a man who claims to be from town of "Lido." And that he made original request to Organization. But Miria attacks.[13]

He dodges blade and awakens into Paburo awakened.[14]

Helen is surprised that Paburo is male. She expected a former female warrior.[15]

Paburo severs Deneve's arm.[16] Helen attacks. But no matter how many legs she cuts off, he keeps regenerating.[17]

But Deneve returns to fight, her arm also regenerating.[18]

When Helen asks why this awakened being is male, Miria reveals that the first Claymores warriors were male, but that the Organization stopped making them, as they awoke too quickly. They were retired and replaced with female warriors.

Paburo tells Miria that he heard that she, No. 6, has extensive knowledge. But she made one mistake in her explanation.[19]

The hunt members are all slated for execution. And that the awakened is actually an executioner for the Organization. The entire mission was a trap.

Paburo promises to give them "a taste of true despair." During his attack, Deneve, Helen and Clare all go down—Miria is the last one standing.[20]


Clare's counterattack on the Paburo awakened

With the others badly injured, Miria alone faces Paburo.[21]

Miria recovers her wounded companions. Paburo cannot score a hit. She stops and goes so fast, he only strikes mirages. He realizes that she must be "Phantom" Miria.[22]

But he suspects that her technique has its limits. After 30 times, Miria's Yoma energy fatigues. He catches Miria and tortures her by piercing her abdomen with his tongue.[23]

But despite Paburo's promise of "true despair," Clare gets up to rescue Miria. Clare alludes, unknown to others, to her experience with Priscilla.[24]

From Teresa's flesh and blood, Clare gained Preemptive Sensing, but to such a low degree, the Organization judged Clare a failed experiment.

Nevertheless, she can read the Yoma energy flow of her opponent, anticipating his moves before they happen. She avoids all of Paburo's attacks.[26]

As Miria watches Clare, she wonders if Clare developed her technique solely to fight awakened beings.[27]

Clare cuts off five of Paburo's six arms. But during the attack, she fails to switch back to her Yoma Energy reading mode.[28]

Miria and Clare are both badly injured, but Paburo is nearly helpless, left only with three limbs. They cut him to pieces.[30]

Retrieved from "https://claymorenew.fandom.com/wiki/Paburo_awakened?oldid=59972"
Community content is available under CC-BY-SA unless otherwise noted.