Classical Ingenue look. Below the shoulder blonde hair is held back with princess crown braids.[5] Wears a medieval, Pre-Raphaelite frilled dress and slip, perhaps in keeping with her "Lady Godiva" image. 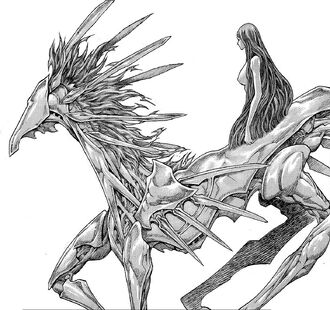 A two-headed, Yoma-like centaur with exposed muscle tissue and spikes. The horse head has a mask-like face typical of awakened beings. A human torso emerges from the croup, giving the appearance of a rider—similar to the awakened forms of Beth[6] and Cassandra. With long dark, flowing hair covering her naked torso, Octavia looks like a demonic Lady Godiva.[7]

Also similar to the earlier horned-jackal form of Irvine, the archer Apostle of the Berserk series.

Calm demeanor. Cavalier attitude toward all. Displays some sense of understanding toward the Ghosts' predicament.[8] Amused by the naivety of both humans and Claymore warriors alike.[9]

Holding the highest rank of No. 2, Octavia leads a group of at least 17 female awakeneds—Octavia's party. The lower ranking male Claymores—Chronos (No. 4) and Lars (No. 6)—are independent of Octavia's group. 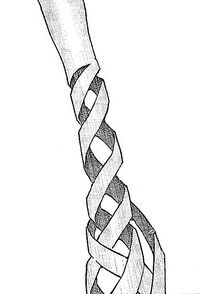 Unknown type. Having no Organization datasheet in the "Yoma War Record," her specialized ability and baselines are unknown.

Appears to have a high strength baseline, given her double-helical ability. Entire "body" constructed like a paper tube. Two coils of Yoma tissue are oriented in opposite directions. This double-helix forms a hollow facsimile of a human body or awakened. These strips can coil and uncoil at will in either avoidance or attack. Similar to the riffling ability of Riful, though Riful has a solid body.

The Ghosts and Raki have returned to the Holy City of Rabona.

Raki spots a young woman sitting hillside. When he suggests she accompany him and his companions to Rabona, she says the city is deserted. Deneve warns Raki away as this woman is an awakened being. Then Raki notices a dozen or so "humans" watching the city from the hills, all but two being female, the two males being Chronos and Lars.[10]

Deneve says they are all awakeneds. Miria adds that they appear to be former single-digits with high baselines. When Miria accuses them of "disappearing" the inhabitants, the female awakened suggests that Miria ask the Rabona guards and Miria's comrades as to what happened. Tabitha senses the auras of Galatea, Clarice and Miata are still inside the city.[11]

While the Ghosts engage the Origami awakened and Tapeworm awakened within the city, Chronos and Lars visit Raki on the ramparts. During their talk, all three are suddenly surrounded by Miria and the Ghosts.

Miria demands to know why Chronos and Lars came here after escaping Priscilla. Chronos replies that only nine awakened survived, but that Octavia's party is getting hungrier by the moment—the Ghosts should beware of them.[12]

Despite the efforts of Cynthia, Tabitha and Yuma to draw out Cassandra's mind, the Ghosts are defeated in the first round. Terrified, Chronos and Lars are aghast at the turn of events. Miria's plan to stop Cassandra has failed. While the male awakeneds are fearful of engaging Cassandra, the more powerful Octavia and her party prove less afraid and decide to take matters into their own hands.[13]

In the forest, Octavia and company have joined the Ghosts in trying to stop Cassandra. When Cassandra's headed tentacles attack, the Ghosts dodge. When a tentacle tries eating Octavia's comrade, the head suddenly protrude with blades from inside, then bursts apart, the prey changing into a flying "death star" with folding blades. [14]

Still another head is lassoed by the awakened Iron maiden, who splits opens an anglerfish-like orifice lined with teeth. The lassoed head is pulled in and the orifice shuts.[16]

An avian "Raptor" awakened now attacks Cassandra. Octavia herself awakens into a variant of a centaur. With her long dark hair she appears like a demonic version of Lady Godiva. She uncoils an arm—a double-helix of Yoma tissue strips—and flails Cassandra. But the thongs destroy the landscape as well, causing the Ghosts to flee.[17] Cassandra is now surrounded by Octavia and company.[18]

Back in the hills, Cynthia, Tabitha and Yuma sense that Cassandra has actually stopped. They now try align their Yoma Energy with Cassandra's, using their collective resonance to break Priscilla's mental hold over Cassandra.[19]

During Round II with Octavia's party, Cassandra changes into a new being—Priscilla–Cassandra. Instead of the Dusteater technique, Cassandra's tentacles spin like a String trimmer as they cut down the surrounding forest and members of Octavia's party. Europa herself is beheaded. Round II of the engagement ends in defeat for Octavia's party.[20]

Helen is concerned about Cassandra changing into Priscilla. When Clare begins to release Yoma energy in response to Priscilla's “presence,” Miria warns Clare to calm down—the transformation is not yet complete.[21]

Octavia and her remaining comrade are dismayed at the failure of their attack. Helen thinks only two members of Octavia's party have survived. But Chronos corrects Helen and throws Europa's still-living head near the Ghosts.[22]

Chronos concedes that he and Lars must join the fight. Lars identifies Europa and describes her special technique—feigning death. As Europa fully awakens into a starfish form, Chronos reveals her moniker, “Europa the Sloth.” He points out that Europa is the only one present that is close in power to an Abyssal.[23]

Both Chronos and Lars awaken, revealing similar biped forms. They join the assault on Priscilla–Cassandra, as do Miria and Clare. Octavia immobilizes Priscilla–Cassandra, preventing her from using the Dusteater. This allows Europa to use her version of the "Trimmer" technique.

The three female and two male awakeneds weaken Priscilla–Cassandra enough for Clare to attack. She eviscerates the thorax of Cassandra's body, destroying the pilot torso of Priscilla.[24]

The old Cassandra pilot torso returns, as does Cassandra's sense of self. Helen notices that Cassandra is not moving as slowly as before. Miria suspects that under Priscilla's spell, Cassandra's movements were restrained—Cassandra took far more injuries here than when fighting Roxanne in Sutfafu. But by destroying the Priscilla pilot torso, Clare inadvertently unleashed Cassandra's true power.[25]

Retrieved from "https://claymorenew.fandom.com/wiki/Octavia?oldid=60648"
Community content is available under CC-BY-SA unless otherwise noted.