Unofficial name. Unnamed by the characters in the manga or anime.

Gender unknown. The manga version parodies a fashion model on the catwalk. A very atypical awakened, with below the shoulder-length hair, slender body, wasp-waist and high heels. Bladed appendages attached to the arms.

The anime version facially resembles Undine and has a more muscular physique. Lavender complexion. Possibly the only female member of the Northern Army. 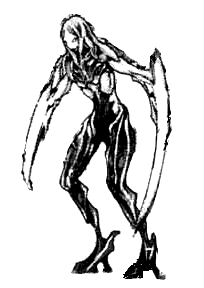 Unknown type. Having no Organization datasheet in the "Yoma War Record," this awakened's ability and baselines are unknown.

Undine, Deneve and Zelda charge Mannequin, who fights back with his/her bladed appendages. Yuliana is missing and is possibly already dead. Mannequin survives the second engagement.[1]

After the Organization's defeat in Pieta, the Northern Army splits up—11 awakened travel to Organizaton Headquarters in the eastern region of Sutafu. The remaining 12 awakeneds head toward Lautrec, where they confront Riful of the West and her consort Dauf.[2]

When Dauf kills the apparent leader, the Flame-hair awakened, Mannequin curses Dauf. Then Riful and Dauf proceed to kill them all. Mannequin is one of the last two awakeneds shown alive.[3]

During the second engagement, Deneve stabs Mannequin in the ribs. In a continuity error, Claudia, previously shown killed, is still alive. Undine leaps and beheads Mannequin as Deneve and Zelda watch.[4]

Retrieved from "https://claymorenew.fandom.com/wiki/Mannequin_awakened?oldid=59835"
Community content is available under CC-BY-SA unless otherwise noted.