レティシア is transliterated from “Leticia,” a Spanish form of the late Latin “Letitia.” May ultimately derive from the Latin "Laetissima." It may mean either "the joyful one" (Spanish, English) or "the joys of Mary" (Latin).[3]

In use in medieval England before the Reformation. The name of several saints of the Roman era, the most famous being Saint Laticia of Nicomedia.

Razor-cut, feathered hair with a fringe that covers the eyes.

Leticia wears a winged buckle, which holds 1-layer spaulders on the shoulders. Vambraces cover the forearms just below the elbow.[4]

Leticia is seen at Organization Headquarters after Miria makes her appearance among the warriors and declares rebellion. They were listening to an address given by a Man in Black, in which he instructs the warriors to attack the approaching rebels (Ghosts). Miria commands the warriors to take up their swords against the Organization.[5] 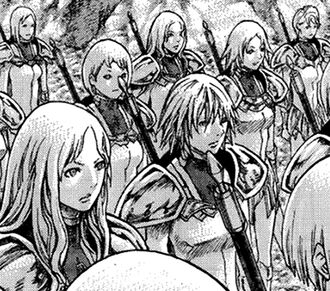 Retrieved from "https://claymorenew.fandom.com/wiki/Leticia?oldid=59817"
Community content is available under CC-BY-SA unless otherwise noted.