Given that the Claymore character's name is revealed while she is defending the Holy City of Rabona, "Lena" may actually derive from "Magdalena"—being of the town of "Magdala"—from the Aramaic מגדלא meaning "great" or "tower." In the context of "Magdalena," "Lena" may allude to being an impregnable "tower" of the Holy City.

"Lena" is used for various female characters in manga and anime. Name of the US singer, Lena Horne.

Lightly armored, Lena wears a crescent buckle, which holds 1-layer spaulders on the shoulders. Vambraces cover the wrists below the elbow.[6]

Self-confident of her fighting potential—until she fights Yuma. This high self-confidence may explain her light armor, a characteristic more typical of those with low agility and strength baselines, such as Elena or Matilda.

In Lacroix village, Cynthia, Yuma and Clare look for an Awakened being they sensed on the outskirts of town. They run into a search and rescue team composed of three warriors.[7] Later, two Men in Black appear.[8]

Lena, the captain of the mission, reports that nothing of interest is in the village. However, she is unable to detect a nearby Awakened being, due to taking suppressant. 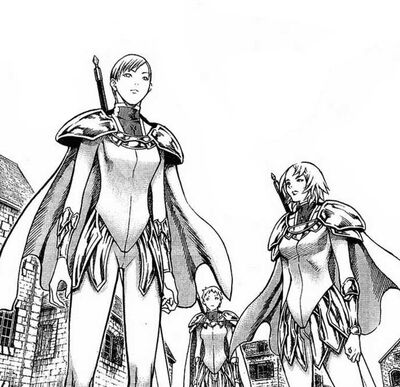 Lena and Norma in Lacroix

But when a female bystander awakens, Cynthia and Clare preemptively attack,[9] while Yuma knocks unconscious Norma and an unnamed warrior, then the two Men in Black.[10]

Lena is outraged at Yuma's attack on her comrades. But when she crosses swords, she cannot believe that Yuma is beating her so easily. Yuma hits Lena in the belly with the flat of her sword, knocking out Lena.[11]

The Awakened is killed. But Rubel witnesses everything.[12]

Lena participates in the Claymore Rebellion.[13][14] She survives the attack of the Abyss Feeders[15] and the attack[16] of the reanimated No. 1 warriors.[17]

Lena is part of the battle group that joins the Ghosts in the Holy City of Rabona. On the ramparts of the city, Galatea senses Europa's approaching aura, whose magnitude is of a greater order than the two previous Awakeneds that landed in town. Clarice asks what should they do. 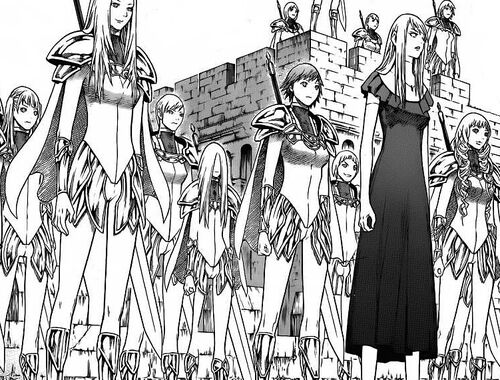 Lena in the battle group

The Next Generation warriors from headquarters are assembled behind them, which includes Lena.[18]

When Europa crashes the city walls like a wreaking ball, Galatea orders everyone to draw their swords. Among the warriors is Lena.[19]

Retrieved from "https://claymorenew.fandom.com/wiki/Lena?oldid=59806"
Community content is available under CC-BY-SA unless otherwise noted.