イースレイ transliterates from "Isley," from the Old English Hesli, describing a hazel wood or grove. Or "Islay," an island off the Scottish coast.

Name of the musical group, the Isley Brothers.

Early basic Organization uniform. A plate buckle hold 3-layer spaulders on the shoulders. Instead of the later carrier, a simple hook attached to a back buckle holds the sword.[28] 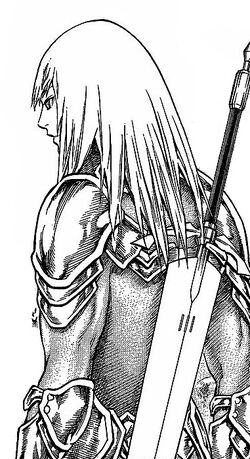 Warriors of the Initial Male Era wear neither a dicky with a symbol, nor a cape.

Isley is also known as the "Silver King." Literary pedigree of this ultimately derives from the magician king, Elric of Melniboné. 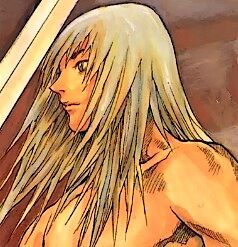 Isley, however, does not use magic as his literary predecessors. He uses abilities innate to awakened beings, even in human form. Can attack with tentacles extruding from between the shoulders while still appearing "human."[29] 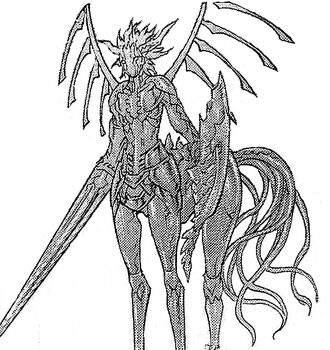 The centaur upper torso has a Swiss Army knife look—can shapeshift various weapons: a lance and shield,[31] sword, [32] and crossbow, which is morphed from a wing.[33]

Gentlemanly. Well-mannered. The outdoor nomadic lifestyle of the anime[34] differs from the country squire lifestyle in the manga.[35] Deep masculine voice in most anime dubs. English gentleman approach of the FUNimation dub is typical. Kazé Deutschland differs from the usual concept with an androgynous voice.[36]

Although Isley personifies the White Hair Black Heart during the Battle of the North arc, Chronos suggests a conscientious man who covertly destroys awakened beings, while pretending to be the worst among them.

In Chaldean Numerology, the number 1, Isley's number, is the number of someone fated to dominate over all others. Or fail catastrophically.

Isley is an offensive type[37] warrior. Due to their high level, the baselines of Abyssal Ones are not measurable and therefore unknown.[38]

In theory, a baseline chart would consist of all EXs, EX being the Organization's rating for "unmeasurable."[39]

Isley has been shown to be an excellent swordmanship instructor.

Isley announces that No. 4, Chronos, is the fourth single-digit to awaken.

Rigaldo realizes that all the warriors will awaken and suppressing Chronos is futile.[41] But before he awakens himself, he challenges Isley to a sword-fight, as he never accepted the No. 2 rank given by the Organization.[42]

But before Isley and Rigaldo can fight, a young female warriors appears.[43] She introduces herself as Riful. Caught unaware, Rigaldo puts away his sword and leaves, as does Isley. Dauf is left alone with Riful.[44]

According to Chronos, Isley awakened on purpose in order to infiltrate and destroy all the male awakened warriors.

Priscilla, now in guise of young girl, wanders through a snowy village. When a stranger offers to help, Priscilla says "I want to eat guts."[45]

Later, Isley and Rigaldo survey wreckage of that village.[46]

Priscilla shows up naked in new village. Again, a stranger offers help. Priscilla responses by killing and feeding on the villagers. Rigaldo shows up and awakens into his leonine form.[47]

Isley awakens into his centaur form. While he combats Priscilla, she destroys half of his upper torso.[49]

Both Priscilla and Isley revert to their human form. Kneeling before Priscilla, he swears allegiance and asks for her greatest wish. She replies that she wants to find her parents in the south. He promises to help.[50]

Clare and Galatea, trapped in Witch's Maw, try to fight their way out.

During battle, Riful explains she needs the warriors to awaken, so they can join her army. The enemy is Isley of the North, inadvertently revealing Priscilla's existence.[51]

After separating from Clare in Scene 34, Raki reappears wandering through the wreckage of a northern village. He escaped from a slave prison. He spots a young girl about to be hit by falling debris. He pushes her out of the way. She clings to him.[52]

Isley finds them. He says the girl seldom becomes attached to anyone. He asks Raki to accompany the young girl home. Then reveals her name—Priscilla.[53]

Raki and Isley find Priscilla outside, sensing the Yoma auras of the Claymore warriors going out—one-by-one.[55]

In ruined village, Raki searches among grave-marks of Claymore Swords, hoping not to find Clare's Symbol. Relieved that she is not buried here, he moves through ruined village. He spots a young girl about to be hit by falling debris. He pushes her out of the way. She clings to him.[56]

Isley finds them. He says the girl seldom becomes attached to anyone. He asks Raki to accompany the young girl home. Then reveals her name—Priscilla.[57]

Raki accompanies Isley and Priscilla, as they camp in the winter forest.[58] 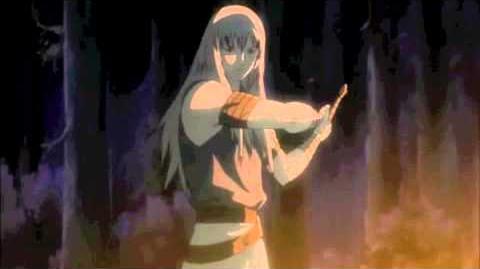 Raki races to town, followed by Priscilla. She awakens and Clare gives chase. Miria, Deneve and Helen follow. Jean finds Raki crying in alleyway. After speaking with Jean, Raki decides to accompany her as she sets out to find Clare. Priscilla and Clare battle in volcano.[60]

Jean and Raki arrive at the volcano. Clare returns to the fight and defeats Priscilla, who reverts to human form. Raki stops Clare from beheading Priscilla. Then Jean dies returning Clare to normal. In a surprise move, Isley appears. He calls for a truce between the Organization battle group and the Northern Army. He suddenly disappears with Priscilla.

The next morning, Isley and Priscilla sitting together, are taking a break from their horse travel. Series for Isley ends here.[62] 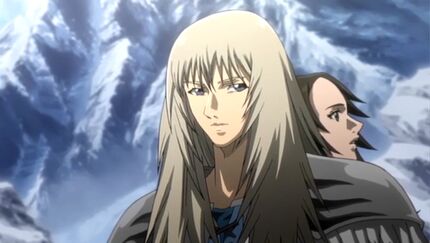 Isley and Priscilla in Alfons

After the Organization's defeat in Pieta, Isley splits the Northern Army in two. He sends 12 awakened to Lautrec and 11 to Sutafu.[63]

Isley himself invades Mucha. Rafaela watches him defeat Luciela of the South.[64] Later, Rafaela finds Luciela kneeling in a stream. They embrace, but Rafaela breaks Luciela's back. Rafaela injects Yoma power into Luciela and they merge.[65]

When Riful and Dauf go to Mucha to support Luciela, they arrive too late. Luciela is defeated and dead. When Riful meets Isley and Priscilla, she orders a retreat.[68] But Riful finds the merged sisters and brings them back to Lautrec.[69]

Deneve and Helen plan to visit their hometowns. But they witness Dietrich's hunt struggling in river with an awakened being. Only Dietrich is left standing.[70] Helen, then Deneve rescue the warriors.[71]

Despite Dietrich's warning, Helen and Deneve visit the town anyway, hoping to catch a glance of Isley for a thrill. But Isley sees through their disguise and attacks.[73] Deneve and Helen fight for their lives.[74]

Dietrich, Deneve and Helen escape as Feeders devour Isley. He cannot regenerate his legs and topples. Abyss Feeders finish him off. His last thoughts are about his "family," made up of himself, Priscilla and Raki.[77]

After the Claymore Rebellion, Raki accompanies the Ghosts to Rabona. From a battlement, Raki watches the Destroyer–Priscilla entity fighting beyond the city walls. Suddenly, Chronos and Lars appear before Raki. Chronos wants to talk.[78]

Chronos notes Raki's unusual physique and matching sword technique, both designed to fight Yoma entities. Raki admits that his mentor was Isley, who he met in the north.[79]

Chronos details Isley's history as warrior No. 1 of the male era. He further speculates that Isley awakened in order to destroy the previously awakened male warriors in a series of stratagems.[80]

Chronos says that Isley's death was caused by weapons of the Organization. Raki suspected that Isley drew something away (Abyss Feeders), so Raki and Priscilla would be left unharmed.[81]

Retrieved from "https://claymorenew.fandom.com/wiki/Isley?oldid=60802"
Community content is available under CC-BY-SA unless otherwise noted.