Unofficial name based on resemblance to the medieval iron maiden.

In humanoid form, she can split in two like an iron maiden and project tentacles from a tooth-lined interior. 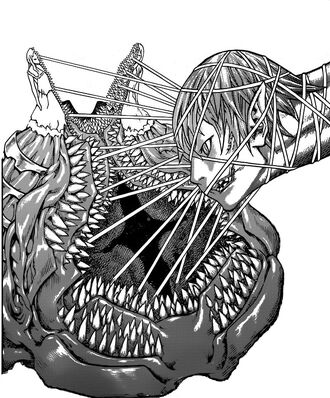 When further awakened, the Iron maiden develops a cone-shaped platform that can split open and reveal an anglerfish-like orifice, vulva-shaped and lined with teeth. Her tentacles can drag prey into the orifice for consumption.

Expressionless aristocratic demeanor. Shows no emotions when killed by Cassandra.

Appears to have a high strength baseline, given her shapeshifting and tentacle ability.

The Ghosts and Raki have returned to the Holy City of Rabona.

Raki spots a young woman sitting hillside. When he suggests she accompany him and his companions to Rabona, she says the city is deserted. Deneve warns Raki away as this woman is an awakened being. Then Raki notices a dozen or so "humans" watching the city from the hills, all but two being female, the two males being Chronos and Lars.[1]

Deneve says they are all awakeneds. Miria adds that they appear to be former single-digits with high baselines. Among the awakened is Iron maiden.[2]

Despite the efforts of Cynthia, Tabitha and Yuma to draw out Cassandra's mind, the Ghosts are defeated in the first round. Terrified, Chronos and Lars are aghast at the turn of events. Miria's plan to stop Cassandra has failed. While the male awakeneds are fearful of engaging Cassandra, the more powerful Octavia and her party prove less afraid and decide to take matters into their own hands.[3]

In the forest, Octavia's party have joined the Ghosts in trying to stop Cassandra. When the headed tentacles of Cassandra's attack, everyone dodges. When one tentacle tries eating Octavia's comrade, the head suddenly protrude with blades from inside, then bursts apart.[4]

The awakened that lands on the ground looks like a ninja death star with folding blades.[5] The robotic torso resembles Roxanne's awakened form.[6]

Still another head is lassoed by the awakened Iron maiden, who splits opens an Anglerfish-like orifice lined with teeth. The lassoed head is pulled in and the orifice shuts. [8]

An avian "Raptor awakened" now attacks Cassandra. Octavia herself awakens into a variant of a centaur. With her long dark hair she appears like a demonic version of Lady Godiva. She uncoils an arm—a double-helix of Yoma tissue strips—and flails Cassandra. But the thongs destroy the landscape as well, causing the Ghosts to flee.[9] Cassandra is now surrounded by Octavia and company.[10]

During Round II with Octavia's Party, Cassandra changes into a new being—Priscilla–Cassandra. Instead of the Dusteater technique, Cassandra's tentacles spin like a string trimmer as they cut down the surrounding forest and members of Octavia's Party.

The Iron maiden herself is sliced horizontally and killed.[11] Round II of the engagement ends in defeat for Octavia's Party.[12]

Retrieved from "https://claymorenew.fandom.com/wiki/Iron_maiden?oldid=60602"
Community content is available under CC-BY-SA unless otherwise noted.