Hysteria's nickname, the Chinese loan words 流麗, usually means "flowing," but can mean "weeping" or "elegant." Hysteria's technique itself may be far from simple, or elegant.

There are various Japanese spellings for "elegant" and "elegance," the most conventional being エレガント (elegant) and エレガンス (elegance). 流麗 is common in East Asian ad copy, used in the Madison Avenue–Fitzrovia sense of "streamline" or "sleek."

The furigana りゅうれい[14] ryū rei (flowing, elegant) superscripted over 流麗 adds no additional meaning nor clarifies if "flowing" or "elegant" is the intended meaning of 流麗. 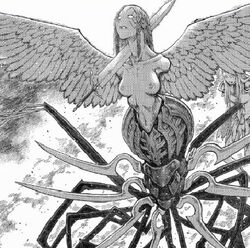 Hysteria sheds her pupal shell, legs and blades, molting into a mosquito-like form, with two new pair of legs and wings.[18] 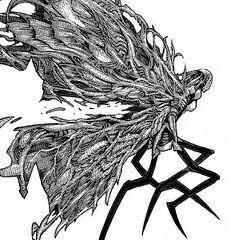 Likes being center of attention—dislikes being ignored. Has scant memory of past, though remembers her death on Rockwell Hill.[19]

In Chaldean Numerology, the number 1, Hysteria's number, is the number of someone fated to dominate over all others. Or fail catastrophically.

But where Miria gains distance from attacks, leaving afterimages, Hysteria makes passing attacks, her afterimage "flowing" through target, hence the most probable translation of the moniker 流麗.[21]

Use of blades possibly similar to reeled spear-gun-like tentacles of Dreadlock awakened, [22] anchored blades allowing sudden movement and turns in any direction.

At Organization Headquarters, Dae gets permission to resurrect Cassandra, Hysteria and Roxanne.[24]

Later, during Claymore warrior rebellion, Dae releases the resurrected No. 1s. During the engagement between the warriors and Abyss Feeders, the No. 1s cut down everyone en masse.[25]

Miria fights Elegant Hysteria, who mentions Rockwell Hill. Miria realizes a resurrected Hysteria stands before her. Miria remembers Hysteria's history—a warrior who neither sent a black card, nor submitted to execution, before reaching her limit.[26]

On Rockwell Hill, an unspecified number of warriors were killed before killing Hysteria.[27]

During "David versus Goliath" combat, Miria revives the original Phantom, barely surviving each strike from Hysteria.[28] Finally, Miria increases her baseline Yoma power to the Phantom's burst level, then jumps it from there.[29]

Miria can now strike Hysteria, even though she also sustains wounds. Hysteria is appalled at this crude technique.[30]

Unknown to Hysteria, Miria spotted a lost sword on the battlefield. Miria throws her armless body over it—hiding it—then waits for Hysteria.

When Hysteria comes to deliver the coup de grace, Miria clutches the sword hilt in her teeth and runs Hysteria through the neck. Hysteria collapses,[33] but soon awakens.[34]

As Miria evacuates another wounded warrior, she confronts the awakened Hysteria, who cannot swallow, due to the sword in her throat.[35]

Yoma power hidden, Tabitha succeeds in approaching Hysteria, then clipping her wings. But when the others close in, Hysteria instantly retreats to earth. The warriors are left crossing each others swords.[39]

As Hysteria fires her tethered blades, Miria analyzes the situation.

On the ground, Hysteria's sudden turns and stops are due to leg traction, similar to the great claw Clare used to control her speed in Pieta.[42] When aloft, Hysteria's blades, once anchored, allow her to suddenly change direction, horizontally or down.[43]

Miria begins to awaken, hoping that she only fights Hysteria and not turn on the warriors. But Deneve persuades Miria to fight and die as a human.[44]

Deneve shows Miria how to use Anastasia's hair by injecting one's Yoma energy to adjust the strength. Midair, Miria devise a plan.[45] She has Anastasia weave together several hair strands, in which all eight warriors begin to inject Yoma power.[46]

Deneve and the Ghosts watch as Miria draws Hysteria into the maelstrom between Cassandra and Roxanne.[47]

Despite the proximity of the Hysteria-Miria dual, Cassandra and Roxanne fight on, oblivious to the other combat. Roxanne launches her faulds-like blades at Cassandra.[51]

No longer needing her blades to control her direction, Hysteria becomes even faster than before.[52]

Miria is losing the fight, being wounded repeatedly by Hysteria. But Miria doggedly lures Hysteria into position. Nearby, Cassandra dares Roxanne to use up her blades. Just before Roxanne launches her final volley to finish off Cassandra, Miria touches on Anastasia's cord of hair,[53] then launches herself at hyper-speed past Hysteria, fleeing ground zero.[54]

Hysteria, distracted in her pursuit of Miria, is hit by a blade midair, then bit by a hydra-tentacle from Cassandra, who mistook Hysteria as Roxanne.[55]

The shattered remains of Hysteria barely clings to life. She pleads for help. Her soliloquy describes her feelings of betrayal when her comrades attacked her on Rockwell Hill. She remembers two warriors that fought her—warrior No. 4, Rosemary. And a mysterious, smiling warrior, resembling Teresa, a new single-digit that is never named. The smiling warrior's attack weakened Hysteria, allowing No. 4 to deliver the coup de grace.[56]

As Hysteria remembers the face of the smiling warrior, the remaining Yoma energy inside Hysteria takes over her mind. Hysteria begins speaking like Priscilla, accusing the unnamed warrior of being a murderer. Finally, the Yoma Energy takes the shape of Priscilla.[57]

Miria bounces backs from the shock. Deneve and Helen, also recognizing Priscilla, attack the image, but it is only an apparition, which dissipates. Hysteria is dead.[58]