Early life unknown. Appears to be an officer of unknown rank in the Rabona guards.

Clare is on a covert operation in Rabona.

Galk and Sid attack Clare, who returns from night interview with Father Vincent. Sid throws three knives, which Clare catches and throws back.[13] Later that night, two guards are killed by the Voracious Eater.[14] 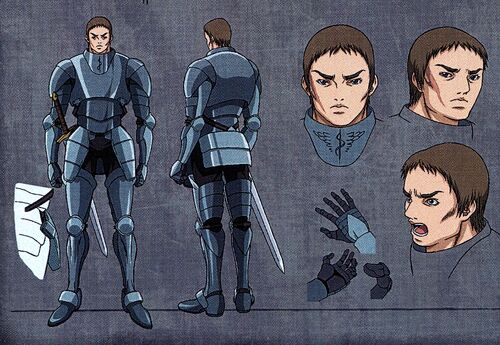 Next morning, Sid interrogate Clare at inn. Gets into fight with Raki. Galk restrains Sid.[15]

Leaping among the rooftops, Clare heads for cathedral. Galk and Sid intercept her again. While deflecting their attacks, another victim screams. Clare races inside cathedral, where Voracious Eater kills again.[16]

The Yoma attacks from behind. Galk and Sid arrive. Clare saves both from fatal attacks, but is wounded by the Yoma. She is left unconscious.[17]

Despite Sid's protests, Galk brings Clare to Vincent's bedroom,[18] where she remains comatose. 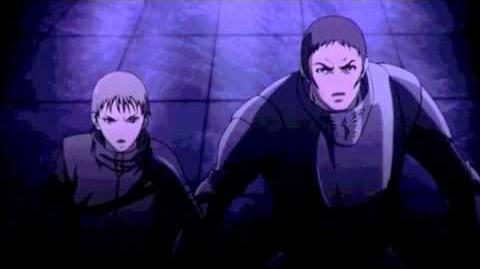 From cold open of Anime Scene 4

With Raki at her bedside, Clare regains consciousness after a 2-day coma.[19]

Cathedral staff have surprise meeting. Despite Father Rodo's protests, Clare, not fully recovered from her injuries, exams each suspect—including Bishop Kamuri and even Vincent—but everyone proves human. Yet all have a Yoma scent.[20] The situation turns ugly as Rado verbally attacks Vincent.

Clare finally reaches the last possibility. If Yoma can impersonate the living, what if one impersonates the dead?[21]

In the baptismal chamber, the Yoma, posing as a corpse, rises from a coffin. He attacks Raki, but Clare arrives in time. Galk and Sid then arrive and the three fight the Yoma.[22]

The Yoma takes Galk's sword and fights Clare, armed only with knives.[23]

Raki gives Galk a statue, which Galk throws to Clare. When the Yoma strikes the statue with the sword, the statue breaks apart, revealing a Claymore sword.[24]

Clare cuts off the Yoma's arm. But the Yoma still holds off his attackers with his extensible claws.[25]

Galk inexplicably charges the Yoma, who pierces Galk's body. Claws caught in Galk's armor, Galk gives the signal—Clare attacks. She cuts off the Yoma's other arm. Then cuts the Yoma in two.[26]

The combat won, Clare now begins to awaken. She tells Galk to kill her, but Raki intervenes and clings to Clare, now turning into a Yoma. Suddenly, Yoma power explodes.

To everyone's surprise, Clare is back to normal.[27]

Day. Vincent, Galk and Sid say goodbye to Clare and Raki. In the anime, Galk gives Raki a sword as a parting gift.[28]

Sid, after helping Clarice and Miata escape guards, takes them to Galk's house. Galk says locals have disappeared and suspects a Yoma. Sid confirms that a woman of Galatea's description lives in town.[29]

Galatea reveals she released Yoma energy, tricking Organization to send a purge team to Rabona. She hoped they would fight Agatha instead. But when Agatha appears as crab-like awakened being, Clarice and Miata ignore her and attack Galatea. 3-way fight develops as Galatea fights both them and Agatha.[31]

Clare and Ghosts show up.[34] They immobilize Agatha by cutting off her legs.

Agatha abandons her crab-form and contracts into a mummy, with tape-like tentacles. As the Ghosts whittle down this false body, Agatha escapes in her true human form. She takes Galatea hostage. But Clare, per Galatea's suggestion, uses Quicksword to kill Agatha.[35]

After Rabona is saved, Sid and Galk celebrate at a tavern party with the Ghosts. Sid tells Clare that Raki was in town looking for her. Galk reassures Clare that she and Raki must meet again.[36]

Galatea suspects the Organization is behind invasion.[38]

After the destruction of the Organization, the Ghosts return to the Holy City. Inside the deserted city, the Ghosts are greeted by a tearful Clarice, then Galatea, Galk and Sid. When Miria asks what happened, Galatea leads the Ghosts to the outskirts of town, where Priscilla is emerging from the Yoma cocoon.[39]

That night in the town hall, Miria explains the situation to the Rabona guards and the Claymore warriors. But Sid insists that the human guards will stay and defend the city with their lives, repeating what he said during the early Clare arc.[40] Miria apologizes for asking them to leave and even allows Clarice to stay.[41]

Then Sid tells Miria that upon Miria's request, he and the guards gathered something unnamed to be used for some unknown purpose.[42]

Retrieved from "https://claymorenew.fandom.com/wiki/Galk?oldid=59354"
Community content is available under CC-BY-SA unless otherwise noted.