Rafaela's datasheet names her technique in Yoma War Record III.[5] The manga and anime describe only.

Rubel meets Rafaela in her apartment. Rafaela has suppressed her Yoma power—she refuses to regenerate lost eye as penance for losing her sister, Luciela, in the controlled awakening experiment.[9]

Rubel says that she has been decommissioned by the Organization. He further suggests she leave.[10]

At a forest pond, Rafaela meets a young runaway trainee, Teresa. The technique is not yet perfected as Teresa can still detect Rafaela's aura.[11]

After an indeterminate number of years, Rubel finds Rafaela living in a cave. By now, her Yoma power is extinguished, which makes her ideal for covert operations. Rubel offers the position of No. 5. Rafaela accepts in exchange for Luciela's whereabouts.[12]

Meanwhile, Clare travels though forest. Suddenly, she senses something amiss in Ilena's arm. But a loud noise interrupts her thoughts.[15]

Despite Clare's rebuffs, Jean insists on following her though forest. Suddenly, Rafaela confronts them. She asks which is Clare.[16] 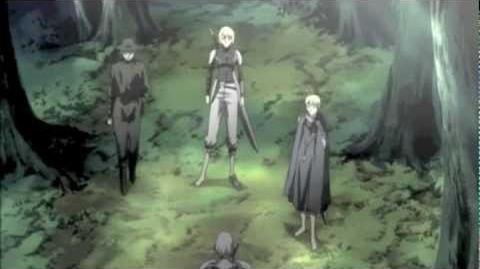 Both warriors are confused as they failed to sense Rafaela. Rubel appears behind Rafaela.

He reveals that Rafaela excels in Yoma power concealment. And, that she can take on both Clare and Jean.[17]