Helen's datasheet names her technique in Yoma War Record II.[5] The manga and anime describe only.

Helen wears sleeves and leggings of a dark material of unknown composition that stretches indefinitely.[10] May be similar to uniform material of Alicia and Beth.[11]

In the Paburo Mountains, the hunt is attacked by the Paburo awakened.[12]

Paburo severs Deneve's arm. Helen counterattacks with Flexible Limb Stretching. But no matter how many legs she cuts off, he keeps regenerating.[13] 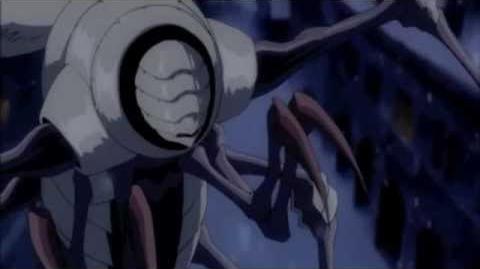 Awakened Clare out of control. She demands that Helen euthanize her. Helen stretches her sword-arm, saying she will never forgive Clare for making her do this. In manga, Jean interrupts Helen.[16] In anime, Clare detects Priscilla's Yoma power and flies skyward to fight her.[17]

Helen is one of seven Ghosts who desert Organization. Hiding in mountains, they train with Yoma powerless techniques.[18]

Despite Dietrich's warning, Helen and Deneve visit town anyway, hoping to catch a glance of Isley for a thrill. But Isley sees through their disguise and attacks. Helen and Deneve fight for their lives.[20]

Deneve grabs an incapacitated Clare and flees Priscilla.[22] Deneve and Helen race toward the Destroyer.[23]