is a dialectal Scots form of "fold" in the sense of "field" or "meadow."[4] The connection, if any, to the armor skirt is unknown.

Usually unnamed by characters in the series. Described as "skirt-like fauld armour" in the FUNimation DVD booklets.[5]

"Faulds" is a common last name in English-speaking countries. Name of the Victorian era Scottish physician, Henry Faulds, who introduced modern medical procedures and fingerprinting in Japan during the 19th century.

Warriors wear a metal skirt, consisting of bands protecting the hips and thighs. The faulds hang from a belt tucked under the shirt. This belt also holds a waist Pouch[6] which is usually hidden under the Cape. 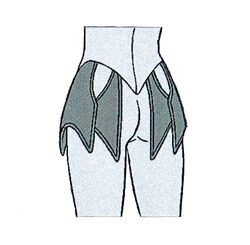 Considerable variation in band shape and number among warriors.[7][8][9][10] Clare's faulds, for example, has eight bands and a protective seat plate. 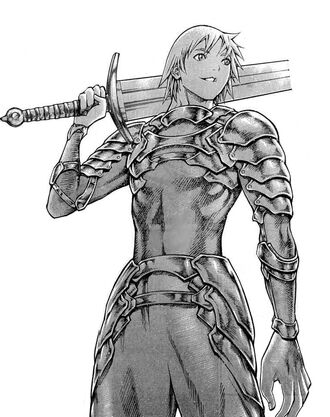 The hip design is still used by the Men in Black and humans outside the Organization.

In contrast to the renaissance faulds of European armor suits, Claymore faulds allude to "pteruges"—skirts of leather strips worn by ancient Greek and Roman soldiers. Unlike the historical pteruges, Claymore faulds appear to be of solid metal stylized in an Art Deco manner.

In addition to the various shapes of the individual bands themselves, the arrangement of the bands varies from warrior to warrior.

Most skirts have bands that overlap vertically or hang free with little contact with each other. Examples of overlap are Teresa and Clare. An examples of almost no overlap is the Awakened Claymore. 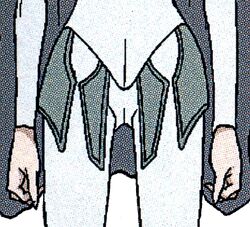 No overlap between rhomboid bands

Other skirts have bands that overlap horizontally. These arrays usually protect the hips—examples are the skirts of Rafaela[14] and Helen.[15] 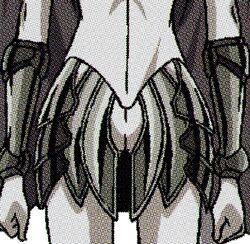 Sometimes these arrays hang in front, as with Jean's skirt.[16]

Teresa's skirt has a protective plate on the seat of the skirt, which is missing on other uniforms, as in the case of Ilena or the Awakened Claymore. 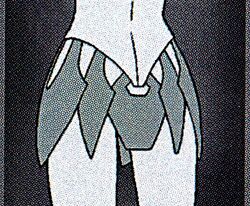 The faulds or bands usually take on the shape of leaves:

Individual skirts usually combine these shapes. For example, Veronica uses wide spatulate bands on the hips, narrow cuneate bands front and back, with a rhomboid seat plate in the rear.

Retrieved from "https://claymorenew.fandom.com/wiki/Faulds?oldid=59799"
Community content is available under CC-BY-SA unless otherwise noted.