a Latin form of the Greek Ευρώπη (Evrópi

), from the word elements εὐρυ "wide" and ωψ "face, eye." Ευρώπη may further derive from the Akkadian erebu ("to go down, set" in reference to the sun) which would parallel a westerly direction. The subcontinent of Europe is traditionally identified as the “West.”

”Europa” is the name of various characters in Greek mythology, dating back to the 8th century BC Illiad. Also a moon of Jupiter.

Appears as "tween," 8–12 years old. Unlike the silver eyes of Claymore warriors, Europa has darker eyes like other awakeneds. Her hair is medium dark, except for a blonde or bald patch atop her head, giving her a piebald or tonsured appearance. Her bowl-cut hair is combined with waist-long "twin tails" (ツインテール tsuin teeru

The central body disk is a variant of the traditional Roman Janus mask, with a conjoined, Siamese twin faces similar to the modern Smiley face. Compare to the Origami awakened. Spaulders and buckles protect the vital neck and shoulder areas.[5] 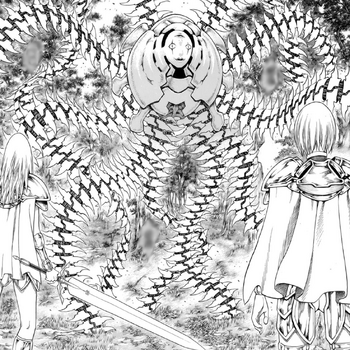 Member of Octavia's party. Child-like demeanor disguises the personality of a fully mature predator of humans. Similar to Riful.

As a claymore, octavia was never one to interfere in battles irrespective of circumstances.

Defensive type. Her ability were well pronounced and even stated to be able to easily dispatch off an awakened no.5 single handedly. Chronos points out that Europa is the closest one present to an Abyssal,.

Miria mentions that a No. 3 and 5 are among Octavia's party.[6] Europa is likely either.

In battle, should octavia get hurt, she immediately suppreses her yoma energy, plays possum and redirects the damage recieved to less vital organs. after the battle, she immediately regenerates through a burst of yoki. Dae opines that this was a trait particular only to octavia.

Chronos describes Europa's “play dead” technique, her version of Tonic immobility. Under stressful combat situations, Europa resorts to remaining motionless much like a opossum or sloth, hence an alternative translation of Europa's moniker, “Europa the Sloth.”

However the standard Japanese name for the English-language "sloth" is ナマケモノ Namakemono.

When in human form, Europa uses a single "wire saw" arm to flay the target. The arm resembles a series of bladed segments connected with a cable. In awakened form, she spins her many tentacles like a string trimmer, similar to Cassandra's last attack during her Priscilla–Cassandra phase. A repeat of the Falcon Sword from the Teresa arc.

In an urban environment, Europa can ricochet down narrow streets and alleyways, bouncing against the walls and pavement, as if she were a pinball.[7] This technique enables her to use streets and building to evade attack. In Rabona, she uses the entire city as a sort of pinball playfield.

As a claymore, Europa was a single digit warrior in the top 10 prior to awakening.

In a forest near the Holy City of Rabona, the Ghosts attack Cassandra. Their attack fails, but then are reinforced by the awakening of Octavia's party.

Europa awakens her arm and attacks the with her wire saw-like tentacle. Cassandra's leg is sectioned apart.[8]

At a distance, the Ghosts watch the fight between Octavia's party and Cassandra. Helen thinks Miria's plan is working—drawing out Cassandra's sense of self—but Miria senses something is astray.

Elsewhere, as Cynthia, Tabitha and Yuma try to bring out Cassandra's sense of self, Tabitha notices something strange. Tabitha now wonders who really is inside the awakened body.[9]

Priscilla–Cassandra uses the Dusteater technique to counterattack and destroys most of Octavia's party. Europa herself is beheaded.[10]

At a safe distance, the Ghosts watch the mayhem. Helen is concerned about Cassandra changing into Priscilla. When Clare begins to release Yoma energy in response to Priscilla's “presence,” Miria warns Clare to calm down—the transformation is not yet complete.[11]

Octavia and her remaining comrade are dismayed at the failure of their first attack. Helen thinks only two members of Octavia's party have survived. But Chronos corrects Helen and throws Europa's still-living head near the Ghosts.[12] Chronos concedes that he and Lars must join the fight.

Lars identifies Europa and describes her special technique—feigning death. As Europa fully awakens, Chronos reveals her moniker, “Europa the Sloth.” He points out that Europa is the only one present that is close in power to an Abyssal.[13]

When Europa offers to exchange her killing Cassandra for human food, Miria refuses, but points out that if Europa does not stop Cassandra now, Europa's food supply will be endangered anyway. Europa accepts this reasoning and attacks Cassandra.[14]

Both Chronos and Lars awaken, revealing similar biped forms. They join the assault on Priscilla–Cassandra, as do Miria and Clare. The three female and two male awakeneds weaken Priscilla–Cassandra enough for Clare to attack. She eviscerates the thorax of Cassandra's body, destroying the pilot torso of Priscilla.[15]

Elsewhere, Tabitha and Miria note that by Clare destroying the pilot torso, Cassandra has been freed of Priscilla's control—Cassandra sense of self has emerged.

But Cassandra is more agile than ever. She avoid attacks by Octavia's party. Chronos tries to attack Cassandra with his tentacles, but she proves too quick for him.[16]

Helen notices that Cassandra is not moving as slowly as before. Miria suspects that under Priscilla's spell, Cassandra's movements were restrained—Cassandra took far more injuries here than when fighting Roxanne in Sutafu. But by destroying the Priscilla pilot torso, Clare inadvertently unleashed Cassandra's true power.[17]

Meanwhile on the ramparts of the city, Galatea senses Europa's powerful aura, which is unlike the two awakeneds that invaded the city before. Clarice asks what should they do.

The Next Generation warriors from Organization Headquarters are assembled behind them, which include Audrey, Miata, Rachel, Dietrich, Anastasia, Rafutera and Nike. Galatea announces that now is the time to defend their ground. [19]

Commanding the Next Generation warriors, Galatea uses her sensing ability to gauge the power of the approaching Europa. She guesses that Europa ranked from No. 3 to 5, but that her true power is completely unlike her aura. In addition to an abnormal mind and body, Europa may be well at Abyssal level.[20]

Anastasia announces that her “wings” are distributed throughout the city and invites everyone to use them as they please. When Europa bursts through the ramparts, four warriors stand aloft—Clarissa (No. 18), Dominique (No. 19), Norma (No. 22) and Minerva (No. 24). Audrey orders the single-digit warriors and double-digit volunteers to advance onto the stretched hairs.[22]

Inside the city, Europa's bladed tentacles whirl about, destroying everything in her path. Before the oncoming Europa, Rachel and Nina argue over the utility of Anastasia's technique. On the ground, Abigail argues with a human guard, who refuses to retreat. As Sid tries to persuade the guard to fall back, a tentacle destroys the guard's arm.[23]

Atop a tower, Miata awakens into a feathered form as Galatea and Clarice struggle to hold on to Miata's human consciousness, despite the chaos in Miata's heart. Meanwhile across the city, Europa spots the huge winged body sprouting from the tower. [24]

Europa senses Miata's aura as well as those of the two warriors' struggling to align themselves with the near out-of-control energy.[25]

As Europa makes for the tower, the Next Generation warriors run interference. Suddenly Rafutera directs Europa into Anastasia's hairs, causing Europa to trip and crash into a roof. On a lower roof below, Rachel uses her Strong Sword to cut Europa's wire saw arms. Audrey diverts Europa's attention with her Gentle Sword as Dietrich plunges from the sky and uses her sword technique to further reduce Europa's arms. But this is only the first deception.[26]

Europa instantly regenerates her arms but faces all the single-digits of the Next Generation. Europa destroys the roofs beneath their feet and they become midair targets. As she attacks Rachel and Nina, Anastasia's hairs and Rafutera's Yoma power harmonization causes the tentacles to miss their targets.[27]

In frustration, Europa tries to attack the two warriors. But the double-digits, in a repeat of Helen's move against Hysteria at Organization Headquarters,[28] destroy the city rooftops in an apparent effort to cause Europa to lose her footing. Europa anchors her arms into the ground, thinking she countered the warriors.[29]

Audrey finally admits her and her comrades' efforts were only a diversion.

Miata ambushes the standing target from behind. Miata has fully awakened into a plumed, multi-winged dragon-worm with a lizard-like head similar to Beth's. The jaw resembles a 3-prong gear puller. Her form appears as an elaboration of the Aztec god Quetzalcoatl.[30]

Miata's three “jaws” fire teeth as if they were Yoma rods. Europa uses her arms to deflect the barrage. When Europa tries to strike, she gets thrown back and crashes into the building roofs below. Miata's counterattack causes the cursing Europa to escape down a street.[31]

The spectators are amazed at Miata's performance. Audrey states that Miata's original power rivaled No. 1s of the past. But she also questions whether or not Galatea and Clarice can really control Miata and bring her back to human form.[32]

In a series of hit-and-run attacks, Europa saws off Miata's wings. When Miata tries to counterattack, Europa bounces away down the narrow streets, ricocheting against the walls and pavement, as if she were a "pinball." Then she attacks Miata again. Rachel and Audrey are dismayed by Europa's street fighting tactics.[33] The entire city has become a sort of pinball playfield for Europa.

Atop a tower, Galatea and Clarice try to guide Miata's fully awakened form. Despite that neither of the warriors are twin sisters of Miata, the Controlled Awakening is made possible by Miata's innocence, her mind unfettered with extraneous thoughts. But Galatea realizes they are losing control.

While Galatea is unaffected, each time Miata is damaged by Europa, the damage is transferred to the weaker Clarice, who is bleeding from her eyes. Any further damage to Miata may be terminal for both her and Clarice.[34]

Despite Miata regenerating her lost appendages, Europa keeps cutting them away. Miata's barrages keep missing their target as Europa artfully dodges the rain of teeth. The teeth begin to hit the ramparts where the warriors and guards watch. At first everyone thinks the teeth are missing Europa, but Audrey realizes that Miata is aiming at the guards.[35]

Galatea and Clarice have lost control of Miata, who begins to fully awakened. Extreme hunger is overtaking her human self. Her tentacles impale two of the guards and is about to eat them. When Audrey protests, Miata fires a barrage at the rampart.[36]

Europa gloats at the situation and begins to feed on the guards herself. Meanwhile on the tower, Clarice collapses. Back at the rampart, Anastasia and Dietrich try to counterattack, but Europa easily cuts them down.[37]

Europa feeds on the guards, while Audrey tries to scold Miata out of eating her two guards. At the tower, Galatea watches helplessly as Clarice deliberately awakens, which catches even Miata's attention.[38]

Retrieved from "https://claymorenew.fandom.com/wiki/Europa?oldid=60704"
Community content is available under CC-BY-SA unless otherwise noted.