エゴン transliterates from "Egon," from medieval Germanic element eg (edge or corner), meaning someone from a corner town of a crossroads. "Egon" and "Mount Shire" (Schiele) allude to Austrian Expressionist painter, Egon Schiele (1890–1918).

Village in an unknown region. Possibly in the western region of Lautrec. Clare and Raki are last seen in the Lautrecian village of Doga. Anime depicts Egon as a walled village on a plateau adjacent to a mountain.

After completing an assignment in Strah, Clare rescues Raki in a desert. She carries him to Egon village, where she deposits him unconscious at an inn.[7]

When Raki awakes in a strange bed, the innkeeper greets him with a tray of food. He tells Raki that a Claymore brought him here.

After bolting down the food, Raki races outside to find the Claymore. On the street, a stranger accosts Raki and tells him that a Claymore is looking for him. 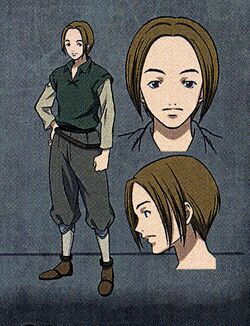 Later, when Raki searches for Clare, he meets a "Claymore" in the wooded outskirts of the village. But Raki has just walked into a trap.

The "Claymore" awakens into a Yoma. Then takes Raki hostage. She demands that the real Claymore show herself. When she does, the Yoma orders her to throw away her sword.[8][9]

From the subtext of the Yoma's dialogue, Clare has been tracking the Yoma for some time.[10] Unknown if client order for Yoma suppression originated from Egon or elsewhere.

When Clare throws the sword over a cliff, the Yoma punches her arm through Clare's abdomen. But Clare jumps off the cliff, carrying the Yoma with her.[11]

At the cliff's bottom, Clare grabs her sword and cuts off the Yoma's arm, then skullcap.[12]

Retrieved from "https://claymorenew.fandom.com/wiki/Egon?oldid=57469"
Community content is available under CC-BY-SA unless otherwise noted.