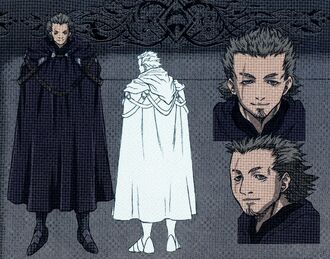 Giant body protected by armor plates. Braided, dreadlock tentacles extrude from head, shoulders and arms. Tentacles and their usage is similar to the awakened form of Chronos.

Most brash and reckless of three scouts. Cannot follow orders.

Unknown type. Having no Organization datasheet in the "Yoma War Record," his ability and baselines are unknown. Appears to have low mental baseline.

Dreadlock tentacles used to catapult body at great distances. Also, to grasp or pierce target. Similar to a reeled-speargun.

Early life unknown. One of three scouts for Northern Army.

Three men approach Pieta—scouts for the Northern Army. The blind-folded scout senses the presence of the Organization Battle Group—24 Claymore warriors. The bearded scout disobeys orders and attacks ahead of the army. He awakens into his humanoid, Dreadlock form.[2]

He shoots tentacles into the village. Tentacles anchored, he catapults himself hundreds of meters. He lands downtown and attacks the villagers. One of his tentacle captures a young girl. But Miria cuts the girl free.

Miria orders: her team attacks Dreadlock. Team Flora attacks the one on the roof. Team Jean the one on the tower. Teams Undine and Veronica stand by.[3]

The Battle Group confronts the three scouts, Dreadlock in front, the blindfolded scout atop a tower, the monk sitting on a roof.[4] Miria cuts away the tentacles, clearing a path for Queenie and Tabitha to attack. Yuma stands by with her sword.[5]

Power of a No. 6Edit

After the defeat of Armadillo and Insectile, Miria decapitates Dreadlock. The other teams rush to Miria's aid, only to find the fighting over.[6]

After the battle, Tabitha carries Yuma, who lost her arm.[7]

Retrieved from "https://claymorenew.fandom.com/wiki/Dreadlock_awakened?oldid=59520"
Community content is available under CC-BY-SA unless otherwise noted.