The VIZ Media translates 龍の末裔 as the "Dragons' Descendents."[13]

Biped, humanoid form. Limt describes their size as twice as large as humans. Specimen in the secret room has flame-shaped crest and bony breast plates. 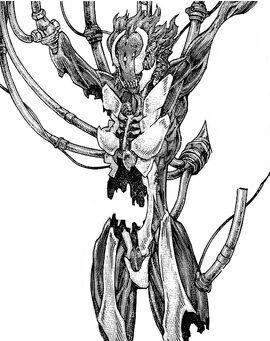 Owning to the mutilated condition—due to repeated shaving of tissue samples—the normal appearance of the unawakened form is unknown.[14]

They resemble reptilian forms of awakened beings.[15] Their bodies appear as an assemblage of jagged scales, with beam structures supporting their heads. Like their unawakened form, they have a flame-shaped crest. Crest similar to Flame-hair awakened.

In Rabona, the Ghosts rescues Galatea and the Holy City from Agatha.[16] Afterward, Miria relates her research on Organization—Miria's theory.[17]

Miria refers to reptilian tribe that exists on what Miria calls "an even greater land outside of this one."[18]

These dragon-like beings support the human Dragons' allies in the war on the mainland. Miria implies that the Claymore sword was originally intended for use against the Dragons, due to their thick hide.[19]

Organization personnel flee Headquarters after Cassandra, Roxanne and Hysteria awaken. After the deaths of Hysteria and Roxanne, Miria orders Deneve and Helen to search the Executive facility.[20]

But Miria's orders are a ploy to distract her comrades. Miria relocates a pilastered portal she discovered nine years ago. 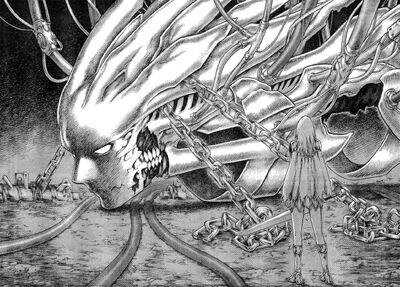 She forces open a panel, leading to a downstairs chamber, where two specimens of the Dragons' Descendents are chained—a large reptilian form chained to the floor, and a skeletal biped hanging from the ceiling. Tubes attached to their bodies provide life-support.[21]

Limt appears. For unexplained reasons, he has stayed behind.

). He explains that they are a hermaphrodite people, who once awaken, remain in their dragon form. And can live up to 200 years.

And shavings of tissue from their awakened and unawakened forms, when combined, create a mobile parasite that takes over the brain in humans, who develop into Yoma.[23]

Miria notes that the Organization violated their own rule about never killing humans, as they turned humans into Yoma, then ordered their warriors to kill these former humans. She beheads Limt, then cuts the life-support tubes of the specimens, which instantly decay.[24]

Retrieved from "https://claymorenew.fandom.com/wiki/Dragons%27_Descendents?oldid=57247"
Community content is available under CC-BY-SA unless otherwise noted.