ドミニク is transliterated from “Dominique,” an androgynous variant of Dominic, from the Late Latin Dominicus meaning "of the Lord."

Large round eyes in a baby-face framed with tendrils of curly mid-back hair. Similar in hairstyle and facial appearance to Flora, though softer and less fine-boned.[2][3] 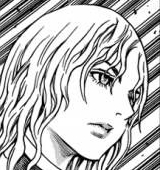 First seen at Organization Headquarters on the ground, lying unconscious from flesh wounds inflicted by Miria's attack.[4][5] She later appears at address given by a Man in Black, in which he instructs the warriors to attack the approaching rebels (Ghosts).[6]

After she joins the Rebellion, she is attacked by the reanimated No. 1s and is again lying unconscious on the ground.[7]

Violet is part of the battle group that joins the Ghosts in the Holy City of Rabona. On the ramparts of the city, Galatea senses Europa's approaching aura, whose magnitude is of a greater order than the two previous Awakeneds that landed in town. Assembled behind Galatea are the warriors.[8]

Anastasia announces that her “wings” are distributed throughout the city and invites everyone to use them as they please. When Europa bursts through the ramparts, four warriors stand aloft—Clarissa (No. 18), Dominique (No. 19), Norma (No. 22) and Minerva (No. 24). Audrey orders the single-digit warriors and double-digit volunteers to advance onto the stretched hairs.[9]

Retrieved from "https://claymorenew.fandom.com/wiki/Dominique?oldid=59813"
Community content is available under CC-BY-SA unless otherwise noted.