ダフ transliterates from "Duff," an anglicized form of several proper names that ultimately derive from the Scottish-Gaelic dubh (black, dark). Possibly alluding to the inner psyche of the character. VIZ Media and FUNimation use "Dauf."

Early basic Organization uniform. A plate buckle hold 3-layer spaulders on the shoulders. Instead of the later carrier, a simple hook attached to a back plate holds the sword.[12] 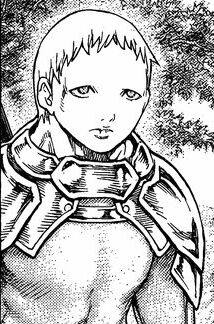 Dauf in uniform
Warriors of the Initial Male Era wear neither a dicky with a symbol, nor a cape.

Thick-armored humanoid giant. Dauf fires veined Yoma rods from his hands, arms and mouth. A band of tissue support either side of his mouth. In colored manga illustrations Dauf is depicted as brown. In the anime he appears blue.

In the Lautrec sequence with Priscilla, he attacks Priscilla. He is infected by three huge, phallic-shaped rods, His eyes appear pupil-less, while his body bears serrated ridges like Luciela's Hellcat form. During the combat with Priscilla, he develops arms resembling Hellcats. 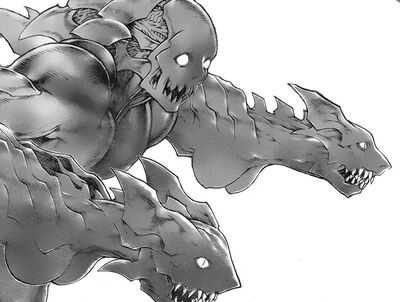 Uncouth, irascible, with loud, arrogant speech, often punctuated with unfulfilled threats. Consort of Riful of the West. Insecure about relationship with Riful, who occasionally threatens to leave him.

Dauf is an offensive type[14] warrior, his specialized ability is undescribed by the Organization.

Awakened, Dauf can fire veined Yoma rods of various sizes.[15] His armor's solidity has the highest rating of all awakened Beings. Possibly due to this solidity and being an offensive type, his regeneration ability is limited.[16]

Isley announces that No. 4, Chronos, is the fourth single-digit to awaken.

Rigaldo realizes that all the warriors will awaken and suppressing Chronos is futile.[18] But before he awakens himself, he challenges Isley to a sword-fight, as he never accepted the No. 2 rank given by the Organization.[19]

But before Isley and Rigaldo can fight, a young female warriors appears.[20] She introduces herself as Riful. Caught unaware, Rigaldo puts away his sword and leaves, as does Isley. Dauf is left alone with Riful.[21]

In abandoned castle, Riful, from her throne, supervises Dauf in awakening members of Zakol hunt, Jean and Katea. After Katea awakens, Dauf tests her power, but finds her too weak. Riful orders Katea destroyed, despite awakening 29 previous subjects.[24] 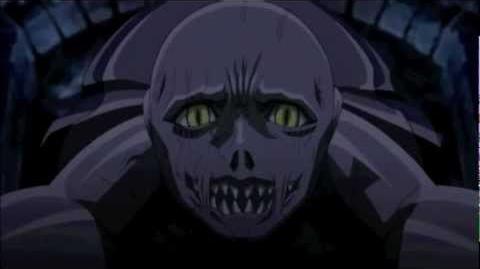 To break the stalemate, Galatea orders Clare to retrieve Jean, while she holds off Dauf.[31]

Upstairs, Galatea is exhausted, but Clare and Jean arrive in time. Galatea and Clare distract Dauf, while Jean attacks his throat with Drill Sword. In the ensuing battle, Dauf slams Galatea and Clare together, then strikes down Jean, but losing most of his fingers.[33]

Clare asks Jean to try once more. This time, Clare's Quicksword—guided by Preemptive Sensing—prevents Dauf from slamming his arms together on the warriors.

Jean bores through Dauf's throat.[34] But Riful stops Jean from beheading Dauf. Riful addresses Galatea and Clare: "You held me off and didn't break, despite my efforts." Then she rewards Galatea and Clare by giving back Jean.

One mistranslation has Riful speaking to Dauf instead: "Someone like you who can accept me without breaking." Mistranslation repeated in English dub of anime.

Riful awards the warriors their freedom.[35]

Riful and Dauf kill 12 members of the Northern Army. But this is misdirection by Isley.[36]

When Riful and Dauf go to Mucha to support Luciela, they arrive too late. Luciela is defeated and dead. When Riful meets Isley and Priscilla, she orders a retreat.[37] But Riful finds the merged sisters and brings them back to Lautrec.[38]

But Riful recovers Luciela x Rafaela. But to awaken the entity, she needs someone skilled in Yoma Power sensing.[39]

Baited by Rubel, Clare, Cynthia and Yuma search for Renée and Rafaela. In forest, they encounter Dauf, who grabs Yuma's leg—Clare cuts it off. While Cynthia regenerates Yuma's leg, Clare follows Dauf into Witch's Maw II. Fight inside castle results. But Clare escapes.[41]

Renée takes suppressant and flees. Dauf tries to pursue her, but she loses him. While Riful and Dauf are distracted by Renée, Clare reenters castle.[42]

During the 3-way combat, the Destroyer fires a volley of rods, hitting all three parties. In the confusion Riful retreats, dragging along Dauf. He asks that she abandon him, so she can flee to safety.[45]

After defeating Alicia and Beth, Priscilla finds Riful and Dauf, who are too injured to defend themselves. Priscilla feeds on both.[46] But Dauf survives and gives in to infection of rods, allowing him to regenerate at the cost of his consciousness.[47]

Dauf pursues Priscilla, as she pursues Deneve, Helen and Clare. He attacks Priscilla. But during the fight, Riful's upper torso slips from his hand. When Dauf glances at it, Priscilla destroys his right arm, then left. When Priscilla regains her memory, she kills Dauf.[48]

Retrieved from "https://claymorenew.fandom.com/wiki/Dauf?oldid=59636"
Community content is available under CC-BY-SA unless otherwise noted.