(woman from Kynthos). Another name for the Greek moon goddess Artemis, who appears in Homer's Iliad.

The heroine of Norihiro Yagi's earliest manga, Undeadman, bears a likeness to Cynthia in both appearance and personality. Here begins the iconic heart-shaped face found throughout Yagi's work. 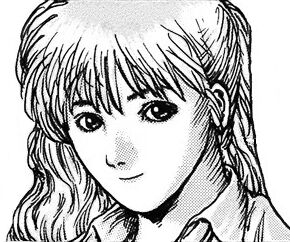 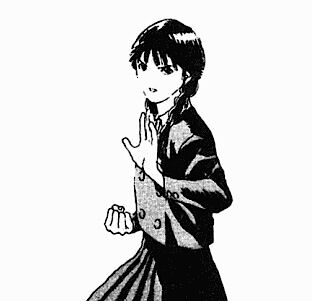 Organization uniform consists of a shark-tooth-shaped buckle holding 2-layer spaulders on the shoulders. Vambraces protect the forearms up to the elbow.

During the 7-year timeskip, she replaces the with "Zettai Ryouiki" look—light armor worn over black top, garters, gaped stockings and bikini bottom.

Closest to Clare in dress. Later in Scene 129, before engaging Cassandra, Cynthia puts on her old uniform.[16]

Cynthia fulfills the healer's role among Ghosts. In Chaldean Numerology, the number 14—Cynthia's number—reduces to 5, the number of androgyny. A 5 puts the welfare of others before oneself.

Cynthia is a defensive type warrior.[17] Having no Organization datasheet in the "Yoma War Record," her ability and baselines are unknown.

In the anime, Cynthia heals injured warriors in the Pieta inn.[18] In the manga, post-7-year timeskip, Cynthia develops her alignment technique to the point where she regenerates Yuma's leg.[19]

During the 7-year timeskip, Cynthia, like the other Ghosts, learns to fight without releasing Yoma power.[20]

Her specific attack technique, if any, is unknown.

During the first engagement with the three scouts, Team Jean is decimated by the Insectile awakened, all team members but Jean lying wounded. Team Jean is rescued by Team Veronica. Veronica and Cynthia act as decoys.[22] Helen immobilizes Insectile's legs, enabling Jean to use Drill Sword. 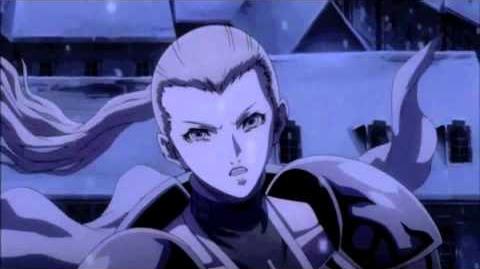 Veronica and Cynthia in action

Cynthia appears in Yuma's flashback. In the banquet hall of the Eastern Inn, Miria holds a meeting with the battle group. She tells everyone to take a half dose of suppressant. If rendered unconscious during combat, a warrior will radiate no aura, making her appear dead to both the Northern Army and Organization.[24]

The Northern Army invades Pieta. During the second engagement, Cynthia is unable to protect Veronica from Rigaldo, who kills Veronica.[25]

Cynthia stands with Miria, Deneve, Helen, Zelda and Clare, as the Northern Army surrounds them.[26]

Cynthia is put in charge of wounded in the lobby of the inn, along with Tabitha, while Miria, Deneve and Helen pursue Clare. For Cynthia, the anime series ends here.[28]

Cynthia is one of seven Ghosts who desert the Organization. Hiding in the mountains, they train with Yoma power-less techniques. Miria serves as captain.[29]

Despite risking exposure, the Ghosts rescue the Dabi hunt.[30] Cynthia and Tabitha give first aid to hunt members.[31]

Meanwhile, in a deserted village, Clare finds evidence that Raki may still be alive. Back at the cavern hideout, she announces her intent to go south. Miria tests Clare's fighting ability. Satisfied, Miria says she will accompany Clare. But everyone decides to go en masse.[32]

The Ghosts find Rabona under siege by Agatha.[33] After Agatha's death, Miria relates her research on Organization—Miria's theory.[34]

Miria will wait in Rabona for everyone's return. But she adds one caveat: "When the time comes, I'll go forward alone if I must,"[35] foreshadowing the events of Scene 106.

Near the Toulouse border, Cynthia senses an awakened in Lacroix village. At the village itself, Cynthia sees the Next Generation No. 14, Lena, leading a Search and rescue team looking for Renée. When a woman bystander awakens, Cynthia and Clare fight the awakened, while Yuma knocks unconscious the three warriors and two Men in Black.[36] The awakened is killed. But Rubel witnesses everything. Later in a private meeting, Cynthia realizes that Rubel is a mole for the Dragons' allies.[37]

Rubel plays on their sympathies by claiming that Rafaela and Renée are being held captive by Riful. Clare suspects that Rubel is only trying to get them killed.[38]

Baited by Rubel, the warriors search for Renée and Rafaela. They run into Dauf, who grabs Yuma's leg, which Clare cuts off. While Cynthia regenerates Yuma's leg, Clare follows Dauf into Witch's Maw II.[39]

When Destroyer awakens, Yuma flees carrying Cynthia, now too weak to move on her own. They run into Beth, struck with a parasitic rod.[40]

Later, Yuma again flees carrying Cynthia, now without her lower torso, lost to the awakened Beth.[41] In a temporary haven, Cynthia reminisce about Veronica in Pieta.

As Yuma holds up Cynthia, they witness the Destroyer consume a forest.[43]

The Ghosts repel a Yoma invasion.[44] Later, the Ghosts bring back the Yoma cocoon to Rabona.[45]

Meanwhile, Cynthia regenerates Rachel's limbs on the battlefield. Rachel is made whole. Soon Miria announces the death of Limt.[50]

The Ghosts sail back to Rabona. Clare is freed from the cocoon,[51] as well as the Destroyer and Priscilla, whose combat engulfs an awakened audience.[52]

Two female awakened are hurled into the city. They awakened into huge tapeworm- and origami-like forms.[53]

Miata then Clarice attack the Origami awakened. Clarice is thrown back, but is rescued by Cynthia and Yuma.[54]

Miria, Deneve, Helen and Clare fight the awakened Cassandra. Elsewhere in the hills, Cynthia, Tabitha and Yuma collectively synchronize their Yoma power with Cassandra, a technique that has parallels with Yoma Energy Alignment and Control and Yoma power harmonization. The goal is breaking the spell that Priscilla has over Cassandra's mind. And preventing the two from merging.[55]

They fail to synchronize with Cassandra. But despite this crisis, they become even more concerned about the mysterious, yet familiar aura that Helen noticed earlier.[56]

Retrieved from "https://claymorenew.fandom.com/wiki/Cynthia?oldid=59826"
Community content is available under CC-BY-SA unless otherwise noted.