Claymore, not クレイモア (Kureimoa), is the official and original title to the graphic novel series.[15]

クレイモア is transliterated from the English "claymore," itself an anglicized transcription of the Scottish Gaelic claidheamh mór[16]

According to The Gaelic Etymology of the Languages of Western Europe by Charles Mackay, claidheamh can also be pronounced claive or glaive. The "v" in claive in the MacKay book has been misread as an "r," giving the misconception that claidheamh is pronounced "claire."

Claidheamh derives from gladius, Latin for "sword," gladius itself deriving from "Gaul," which is Gaulish for "sword."

剣 and 刀 are the most common synonyms for "sword" in the Shueisha edition of Claymore. The Star Comics edition calls it a "Scottish sword."[17]

During the 14–16th centuries, Scottish sword-makers use unhilted blade stock from German metal-shops. The resulting product is called a claidheamh dà làimh 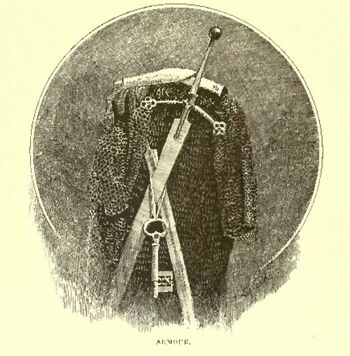 The Claymore rune-like marking, as well as indestructibility, resembles Stormbringer, the sword of Elric of Melniboné. Stormbringer and similar magic swords are a standard trope of countless franchises in graphic novels, animation and video games.

The Organization version of the sword is closer in concept to the medieval than 18th the century version. Of unknown weight and composition. Each sword has unique Claymore warrior's symbol on base of forte. A black card is kept rolled-up inside the hilt.[19] 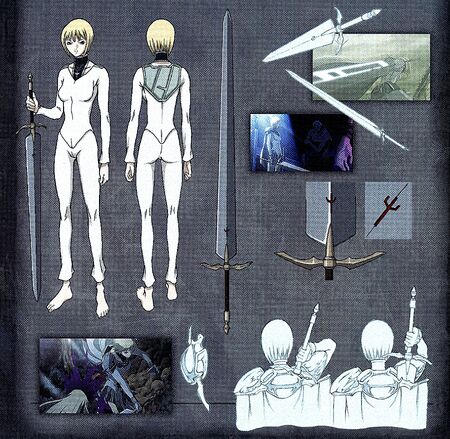 swords used by trainees have no symbol[20] or sharp edge.[21]

In the anime, different colored hilts—blue, green and red—appear. Two hypotheses have been proposed regarding hilt color:

Hilts change color in the anime. The red hilt of Yuliana and red and green hilts of Undine change to blue in later scenes.[25]

In colored illustrations by Yagi, all hilts are blue, regardless of rank or personality type.[26]

Regardless of ability and specialized technique, all Claymore warriors use the three basic strokes as a starting point. One warrior, Teresa, never appears to go beyond these strokes.[27]

Zaki tells Raki that the Organization is named "Claymore."[34] Clare later contradicts this.[35]

After Clare euthanizes her friend, Elena, she uses Elena's sword as a grave-mark.[36]

From another world[edit | edit source]

After battle with Agatha, Miria has meeting with Ghosts, Galatea, Clarice and Miata. Miria reveals results of her investigation into Organization.[39]

Miria emphasizes that the Claymore swords are over-built for Yoma and appear designed for "awakened beings or something even greater."[40] And despite extensive travel on their island world, she cannot find the source material for the swords. She concludes the swords do not originate on the island.[41]

The warriors hear Miria's theory. On "an even greater land than this one," a war is taking place, among 多くの人種と多くの国[42] (many races and many countries). One side is the parent power behind Organization. The other side is allied with Dragons' Descendents, which have "extremely tough skin,"[43] the original target of the Claymore sword.

Retrieved from "https://claymorenew.fandom.com/wiki/Claymore_sword?oldid=60448"
Community content is available under CC-BY-SA unless otherwise noted.