A winged-beetle-shaped buckle holds 2-layer spaulders on the shoulders. Needs to wear a cowl in cold weather.

Ernest, often clueless. Appears to be a pariah in Organization. Tries to conform to Organization's standards. But is thwarted by her own limitations, causing conflict with her peers.

Under stress, Clarice can be given to emotional outbursts.[15]

Later in Rabona, she comes into her own as defender of city.

During Europa's attack on Rabona, Galatea and Clarice together use Controlled Awakening with Miata, the three acting like Alicia and Beth. 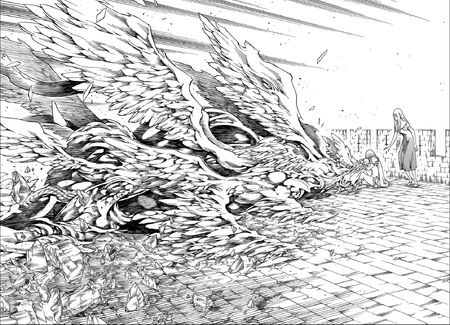 Despite that neither Galatea or Clarice are twin sisters of Miata, Controlled Awakening is made possible by Miata's innocence, her young mind unfettered with extraneous thoughts.[19] Galatea and Clarice fulfill the role of Mind Share/Full Control, while Miata fulfills Mind Share/Full Release.

Clarice appears at end of the 7-year timeskip. She journeys to the deserted village of Dabi in Alfons.[20]

When she meets the Dabi hunt, the captain, No. 9 (Nina), ridicules Clarice for her appearance and low rank.[21] Later, the hunt is brought down by awakened beings.[22]

Clarice wakes to find her comrades unconscious, amid huge bloodstains. She explores further and finds the graves of warriors from the Battle of the North. But Clarice counts 17 swords, instead of 24.[23]

Unobserved, five of seven survivors watch Clarice—Miria, Deneve, Helen, Cynthia and Yuma. The Ghosts argue on what to do about Clarice, but Miria decides to do nothing.[24]

At Organization Headquarters, Clarice reports her findings, but her report is ignored. Rado reassigns her to assist No. 4, Miata.[25]

Despite her size and youth, Miata destroys both Yoma and awakened beings with ease. This frightens Clarice more than the Yoma.[28]

Miata heightened senses lead them to the Holy City of Rabona.[29]

Sid, after helping Clarice and Miata escape the city guards, takes them to a guardhouse in a cemetery. Inside is Galk's office.[30] Galk says locals have disappeared and suspects a Yoma. Sid confirms that a woman of Galatea's description lives in town.[31]

Galatea reveals she released Yoma power, tricking Organization to send execution party to Rabona. She hoped they would fight Agatha instead. But when Agatha appears as crab-like awakened being, Clarice and Miata ignore her and attack Galatea. 3-way fight develops as Galatea fights both them and Agatha.[33]

Clare and the Ghosts show up.[37] Clare immobilizes Agatha by cutting off her legs.[38]

Agatha is forced to abandon her crab form and contracts into mummy, with tape-like tentacles. As the Ghosts whittle down this false body, Agatha escapes into her true core.[39] She takes Galatea hostage. But Clare, per Galatea's suggestion, uses Quicksword to kill Agatha.[40]

Galatea offers to submit to execution. But Clarice and Miata desert Organization instead. Afterward, Miria relates her research on the Organization—Miria's theory.[41]

Miria puts Galatea in charge of Clarice and Miata.[42]

After Miria's failed attempt to destroy the Organization, awakened beings and Yoma invade Rabona. Clarice, Miata, Galatea and Tabitha defend the city together with the guards. The arrival of the Ghosts finally stops the invasion.[43]

Galatea suspects the Organization sent the invasion in reprisal for Miria's attack.[44]

After the destruction of the Organization, the Ghosts return to Rabona. Inside the deserted city, the Ghosts are greeted by a tearful Clarice, then Galatea, Galk and Sid. When Miria asks what happened, Galatea leads the Ghosts to the outskirts of town.[45]

In a city hall meeting, Miria explains the situation to the Rabona guards and the Claymore warriors. Despite Miria's misgivings, she lets the human guards, Clarice and Miata to stay and defend the city.[46]

Clare is freed from the cocoon,[47] as well as the Destroyer and Priscilla, whose combat engulfs an awakened audience.[48]

Two female awakened are hurled into the city. They awakened into huge tapeworm- and origami-like forms.[49]

Miata then Clarice attack the Origami awakened. Clarice is thrown back, but is rescued by Cynthia and Yuma.[50]

During Europa's invasion of the city, Galatea falls back on her emergency plan.[51]

Galatea checks in with Clarice and Miata and confirms they are ready. Galatea instructs Clarice to keep her Yoma energy synchronized with Miata's. Galatea compares their role with Beth, keeping a fully awakened Alicia under control. She offers Clarice a chance to flee the city with Miata, but Clarice wants to stay and protect the people of Rabona.[52] Miata awakens into a sprawling, winged angelic form.[53]

Miata awakens into a feathered form as Galatea and Clarice struggle to hold on to Miata's human consciousness, despite the chaos in Miata's heart. Meanwhile across the city, Europa spots the huge winged body sprouting from the tower. [54]

Europa senses Miata's aura as well as those of the two warriors' struggling to align themselves with the near out-of-control energy.[55]

As Europa makes for the tower, the Next Generation warriors run interference. Suddenly Rafutera directs Europa into Anastasia's hairs, causing Europa to trip and crash into a roof. On a lower roof below, Rachel uses her Strong Sword to cut Europa's wire saw arms. Audrey and Dietrich also divert Europa's attention from the tower.[56]

Europa instantly regenerates her arms but faces all the single-digits of the Next Generation. Europa destroys the roofs beneath their feet and they become midair targets. As she attacks Rachel and Nina, Anastasia's hairs and Rafutera's Yoma power harmonization causes the tentacles to miss their targets.[57]

In frustration, Europa tries to attack the two. But the double-digits, in a repeat of Helen's moves against the awakened Hysteria at Organization Headquarters, destroy the city rooftops in an apparent effort to cause Europa to lose her footing. Europa anchors her arms into the ground.[58]

Audrey finally admits her and her comrades' efforts were only a diversion. Miata ambushes the standing target from behind. Miata has fully awakened into a plumed, multi-winged dragon-worm. Back at the tower, Clarice is shredding tears of blood as she and Galatea control Miata's mind.[59]

Miata's three wing-like “jaws” fire teeth as if they were Yoma rods. Europa uses her wire saw-like arms to deflect the barrage. When Europa tries to strike, she gets thrown back and crashes into the building roofs below. Miata's counterattack causes the cursing Europa to escape down a street.[60]

The spectators are amazed at Miata's performance. Audrey states that Miata's original power rivaled No. 1s of the past. But she also questions whether or not Galatea and Clarice can really control Miata and bring her back to human form.[61]

In a series of hit-and-run attacks, Europa saws off Miata's wings. When Miata tries to counterattack, Europa bounces away down the narrow streets, ricocheting against the walls and pavement, as if she were a "pinball."[62] Then she attacks Miata again. Rachel and Audrey are dismayed by Europa's street fighting tactics.[63] The entire city has become a sort of pinball playfield for Europa.

Atop a tower, Galatea and Clarice try to guide Miata's fully awakened form. Despite that neither of the warriors are twin sisters of Miata, the Controlled Awakening is made possible by Miata's innocence, her mind unfettered with extraneous thoughts. But Galatea realizes they are losing control.

While Galatea is unaffected, each time Miata is damaged by Europa, the damage is transferred to the weaker Clarice, who is bleeding from her eyes. Any further damage to Miata may be terminal for both her and Clarice.[64]

Despite Miata regenerating her lost appendages, Europa keeps cutting them away. Miata's barrages keep missing their target as Europa artfully dodges the rain of teeth. The teeth begin to hit the ramparts where the warriors and guards watch. At first everyone thinks the teeth are missing Europa, but Audrey realizes that Miata is aiming at the guards.[65]

Galatea and Clarice have lost control of Miata, who begins to fully awakened. Extreme hunger is overtaking her human self. Her tentacles impale two of the guards and is about to eat them. When Audrey protests, Miata fires a barrage at the rampart.[66]

Europa gloats at the situation and begins to feed on the guards herself. Meanwhile on the tower, Clarice collapses. Back at the rampart, Anastasia and Dietrich try to counterattack, but Europa easily cuts them down.[67]

Clarice reveals to Galatea that she used to think of herself as special, due to her dark hair. She later found out that she was considered a “failed creation.” Rado laughingly told her that such hybrids were disposed of by causing their Yoma energy to run amok. Structurally weaker than successful transplants, Clarice's awakening body would explode.

Meanwhile, Europa feeds on the guards, while Audrey tries to scold Miata out of eating her two guards. At the tower, Galatea watches helplessly as Clarice deliberately awakens, which catches even Miata's attention.[68]

Retrieved from "https://claymorenew.fandom.com/wiki/Clarice?oldid=60665"
Community content is available under CC-BY-SA unless otherwise noted.