Name may allude to time running out for all Claymore warriors before their awakening. "Chronos" is also the name of a line of villains in the DC Comics' Atom series.

Young man in his 20s. Wears a chin curtain beard.

Humanoid form with dreadlock-like tentacles that extrude from head. Tentacles used to attack target. Appearance and usage similar to the Dreadlock awakened. 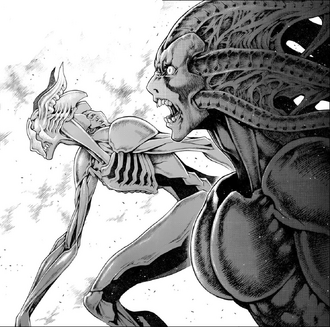 As a personification of time in Greek mythology, Chronos is depicted as a winged dragon, with the heads of a man, bull and lion.[3] The awakened Chronos has a leonine aspect similar to Rigaldo's awakened form.[4] The illustration below shows the Greek Chronos with his consort, the goddess Ananke. 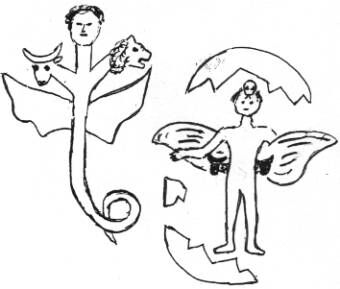 Smirky, cynical. Yet Chronos' cautious nature may account for his longevity and leading the more volatile Lars. The two men are independent and not part of Octavia's party. Chronos even warns Raki and the Ghosts to beware of the female awakeneds.

Unknown type. Having no Organization datasheet in the "Yoma War Record," his ability and baselines are unknown.

During a meeting on Vinci Hill, Isley mentions that Chronos is awakening into a strange form.[5]

Rigaldo realizes that all the warriors will awaken and any action is ultimately futile.[6] But before he awakens himself, he challenges Isley to a sword-fight, as he never accepted the No. 2 rank given by the Organization.[7]

After the Ghosts land near Rabona, Raki spots a young woman sitting hillside. When he asks her to accompany him and his companions to Rabona, she says the city is deserted. Deneve warns Raki away as this woman is an awakened being. Then Raki notices a dozen or so "humans" watching the city from the hills, all but two being female.[8]

Deneve says they are all awakened beings. Miria adds that they appear to be former single-digits with high baselines. When Miria accuses them of "disappearing" the inhabitants, the awakened that Raki spoke to suggests Miria ask the human guards and Miria's comrades as to what happened. Tabitha senses the auras of Galatea, Clarice and Miata are still inside the city.[9]

Helen asks why the gathering. A bearded man says they wish to see both the emergence of the strongest awakened being ever—and the faces of the warriors who destroyed the Organization.[10]

As the Ghosts leave, Miria identifies the bearded man as Chronos, the former No. 4 of the Initial Male Era. His male companion is No. 6, Lars. The woman Raki just spoke to is "Wild Horse" Octavia, No. 2. of an unnamed era.

Despite Chronos' confidence that the awakeneds can escape unharmed should the situation get out of hand, Miria expresses doubts.[11]

Later that night, Lars and Chronos detects that Cassandra's speed is accelerating.[12]

During the combat between the Destroyer and Priscilla, two awakeneds are thrown into Rabona. The Ghosts destroy both.

Meanwhile, atop a city battlement, Raki ponders Clare's quest for revenge. Though he understands Clare's motives, he is still puzzled by Priscilla's. Suddenly Chronos and Lars approach Raki for a talk.[13]

Chronos notes Raki's unusual physique and matching sword technique, both designed to fight Yoma entities. Raki admits that his mentor was Isley, who he met in the north.[14]

Chronos details Isley's history as warrior No. 1 of the male era. He further speculates that Isley awakened in order to destroy the previously awakened male warriors in a series of stratagems.[15]

Chronos reveals Isley's death to weapons of the Organization. Raki suspected that Isley drew something away (Abyss Feeders), so Raki and Priscilla would be left unharmed.[16]

Chronos wonders why Priscilla, after being freed from the Yoma cocoon, made for the awakened beings in the hills, and not Raki and the Ghosts. He guesses that Raki's presence is what prevented an attack. And that Raki's silence indicates a previous relation with Priscilla.[17]

Miria demands to know why Chronos and Lars came here after escaping Priscilla. Chronos replies that only nine awakened survived, but that Octavia's party is getting hungrier by the moment—the Ghosts should beware of them.[18]

Miria taunts them by implying that they fear Priscilla to the point of abandoning all the human food on the island to her. Lars begins to awaken in anger, but Chronos sees through Miria's stratagem. But her comments serve as an opening to a proposal. She explains that Cassandra is under the spell of Priscilla. And that once Priscilla absorbs Cassandra, Priscilla shall defeat the Destroyer and dominate the island.

She reveals her scheme of breaking Priscilla's spell over Cassandra, then hoping Cassandra attacks Priscilla. With the combined strength of the Destroyer, Cassandra, the Ghosts and awakened beings, Priscilla could be defeated. But only if all those present cooperate.[19]

Unpersuaded, Chronos says he will rely Miria's plan to the female awakeneds. In any case, he will wait for Miria to act first. He says farewell to Raki, adding that if Raki's timing is right, he could be Priscilla's strongest opponent.

Helen is concerned about Cassandra changing into Priscilla. When Clare begins to release Yoma energy in response to Priscilla's “presence,” Miria warns Clare to calm down—the transformation is not yet complete.[22]

Octavia and her remaining comrade are dismayed at the failure of their first attack. Helen thinks only two members of Octavia's Party have survived. But Chronos corrects Helen and throws Europa's still-living head near the Ghosts.[23]

Chronos concedes that he and Lars must join the fight. Lars identifies Europa and describes her special technique—feigning death. As Europa fully awakens, Chronos reveals her moniker, “Europa the Sloth.” He points out that Europa is the only one present that is close in power to an Abyssal.[24]

Both Chronos and Lars awaken, revealing similar biped forms. They join the assault on Priscilla–Cassandra, as do Miria and Clare. The three female and two male awakeneds weaken Priscilla–Cassandra enough for Clare to attack. She eviscerates the thorax of Cassandra's body, destroying the pilot torso of Priscilla.[25]

The old Cassandra pilot torso returns, as does Cassandra's sense of self. Helen notices that Cassandra is not moving as slowly as before. Miria suspects that under Priscilla's spell, Cassandra's movements were restrained—Cassandra took far more injuries here than when fighting Roxanne in Sutfafu. But by destroying the Priscilla pilot torso, Clare inadvertently unleashed Cassandra's true power.[26]

Retrieved from "https://claymorenew.fandom.com/wiki/Chronos?oldid=59489"
Community content is available under CC-BY-SA unless otherwise noted.