Unnamed by characters in the manga and anime, this armor is usually referred to as chausses

in most standard references on Western armor.

Sometime confused with greaves, a 1-sided metal shin guard that extends to the knee. A chausse upper surrounds the lower leg like a boot, but can be of varying heights including mid-calf.

Armor that covers the lower leg. Construction varies considerably among warriors as do all armor. Claymore chausses can consist of a solid band (Clare), or fishscale plates (Ophelia).[1] They are worn with metal boots called sabatons.

During the Initial Male Generation, and the First Generation of Riful and the Luciela Era of the Old Generation, chausses usually reached knee-height. 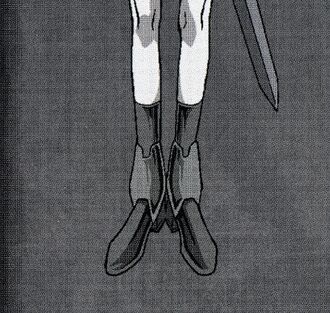 But exceptions exists. Possibly in homage to Teresa, chausses are worn mid-calf by Clare.[3]

Retrieved from "https://claymorenew.fandom.com/wiki/Chausses?oldid=59767"
Community content is available under CC-BY-SA unless otherwise noted.