This awakened hunt is unnamed by characters in the manga and anime.

In the cold open of the scene, a young woman flees a Yoma across a dale. But suddenly a Claymore warrior lops off his skull cap.[3]

The Yoma inadvertently ran into an Awakened hunt. The woman identifies herself as coming from Toriro village. She tells the three warriors that a lone warrior in town is fighting five Yoma (four Yoma in the anime).[4]

The captain, Miria, says that a Voracious Eater may be among the Yoma. And their orders are to search the village with all four warriors together.[5]

When they reaches Toriro, all the Yoma are dead. Clare admits preceding on her own. The Yoma were of the common variety. One warrior (Queenie) accuses Clare of seeking glory (Queenie's lines are given to Miria in the anime).[6] 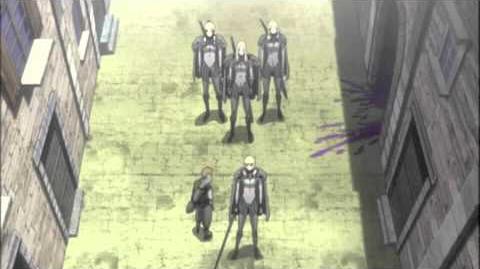 Miria holds back Queeie, but intends to report Clare for disobeying orders.[7]

The three warriors leave. When Raki asks about the nature of Voracious Eaters, Clare says they are an older and more intelligent kind of Yoma.[8]

Later that night, Clare meets Rubel, who reveals the truth about "Voracious Eaters." The phrase is intended for use outside the Organization.[9]

Within the Organization, these special Yoma are called "awakened beings." They are former Claymore warriors that have awakened.[10]

The "Voracious Eater" that she fought in the Holy City of Rabona was only a bigger and more powerful Yoma of the ordinary kind.

Since Clare wants to fight an awakened, Rubel obliges by assigning her to the Paburo hunt.[11]