The school is unnamed by characters in both the manga and anime.

The 教官[2] (instructor) appears to be an exception to the all black clothing rule.[3][4] 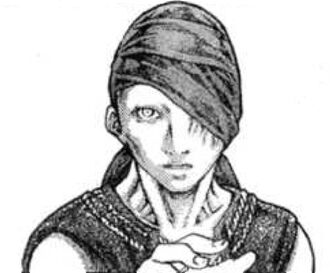 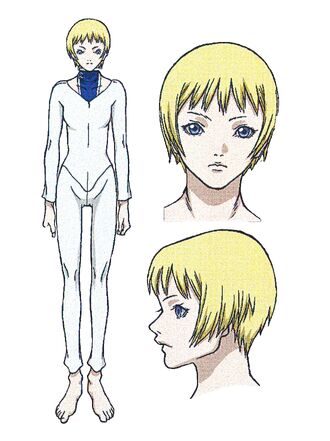 Clare as trainee
The trainees wear the standard shirt and leggings, together with a symbolless dicky, as their uniform. An exception to the standard uniform is the uniform of the Twin Trainees, whose backless shirt and low-rise shorts are designed to permit shapeshifting.[6]

Located at Organization Headquarters in Sutafu. Little is shown of facilities. A gymnasium where sword training takes place is shown.[7]

Anime shows a dormitory resembling a prison lit by hanging chandeliers in a great cavern.[8] Also, village ruins in an unknown locale is used for the trainees' final test.[9]

At a forest pond, an exiled Rafaela meets a young runaway trainee, Teresa, and her instructor.[10]

Clare agonizes as her Yoma implant transforms her body. The pain is such that she and Elena can only sleep by embracing each other.[11]

A teen-aged Clare is attending class.[12]

Her sister trainees wonder aloud about rumors that Clare has Teresa's flesh. To test Clare, one trainee starts a sparring match with Claymore swords with her, but Rubel breaks it up.[13]

On site in a ruined village, Clare's Instructor announces the test to 10 trainees, among which are Clare and the unnamed rival she fought earlier. The group is divided into two teams. They are to fight under realistic conditions.[14]

Clare wanders away from her team and runs into her old rival. While the two fight, Clare discovers all the other trainees are dead.[15]

The two survivors are attacked by a Yoma. Clare's rival is wounded by the Yoma.[16]

Despite the girl's protests, Clare drags her into a building.[17]

The Yoma searches for the two trainees. He spots long hair hanging at a window's edge. He strikes through the building with extensible claws.[18]

With his claws caught in the wall, Clare appears behind him and cuts his skull in two. Outside the village, the instructor and Rubel witness Clare helping her former enemy leave the village.[19]

One of the Twin Trainees breaks into Raki's prison cell. She tests him by making a mock attack with her tentacles.[20]

As other trainees watch, Raki leaps outside and grabs a sword. He deflects Twin's attacks. Then someone throws a sword to her. Now her sister joins sword-fight.[21]

But he stops fight and explains who he is. He also realizes that everyone has a training sword.[22]

Another trainee explains they are runaways, fleeing the Organization.[23]