北の軍 translates literally as "Army of the North." First mentioned by Isley.[7]

北の軍 untranslated in most editions. For example, the "Northern Army of 27" is unmentioned in the Spain edition. Instead, Isley says, "Make Pieta the grave of 27 Claymores gathered there" (Haced de Pieta la tumba de las veintisiete Claymore reunidas en ella),[8] despite the presence of only 24 warriors.

Anime version of characters similar to manga, though differs in detail. The Northern Army resembles the earlier Apostle group of the Berserk series.

In Alfons, Isley and Rigaldo survey the ruins of a village.[9]

Priscilla appears in another village, killing and feeding on villagers.[10]

Rigaldo also appears in the village, on a mission to kill Priscilla. Rigaldo awakens into the Silver Lion.[11]

Isley attacks with bolts, but Priscilla catche them. Then Isley awakens into his centaur form. During his combat with Priscilla, she destroys half his upper torso.[13]

Isley reverts to human form. He swears allegiance to Priscilla and asks her greatest wish. She replies that she wants to find her parents in "Musha." He promises to help.[14]

Riful tells Galatea and Clare that Isley is gathering an army of awakened beings.[15] Riful further reveals Priscilla's existence, but refuse to tell her whereabouts unless Clare can cut her.[16]

In Mucha, the Northern Army wipes out the Pieta hunt—lead by No. 7, Eva. Warriors Kate and Lucia are also killed.[17]

The Battle of the North begins. The battle group of 24 Claymore warriors, under the command of Miria, gathers in the village of Pieta.[18]

The bearded scout decides to disobey orders and attack ahead of the army. He awakens into the Dreadlock awakened.[20]

He shoots tentacles into village. Tentacles anchored, he catapults himself hundreds of meters. He lands downtown and attacks villagers. His tentacle captures a young girl. But Miria cuts girl free.[21]

The battle group confronts the three scouts, Dreadlock in front, the blindfolded scout atop a tower, the monk sitting on a roof.[22]

They attack the still unawakened scout on the roof. But his Yoma Energy, resembling Yoma Energy Alignment and Control, is greater than Galatea's. He makes Flora's sword miss, then makes Carla attack Flora.[24]

Clare realizes what is happening and kicks Karla away. The scout then seizes control of Miria, Lily, Wendy and Clare, dropping them to their knees. As Carla is about to execute everyone, Clare asks Ilena's arm for help. The arm, independent of Clare's volition, shatters the roof, toppling everyone.[25]

Flora finally strikes him. But he escapes and morphs into the Armadillo awakened.[26]

The third scout shapeshifts into the Insectile awakened. Jean is the last team member standing. But Veronica's team reinforces Jean.[27]

Helen uses her extensible arm to distract Insectile, while Veronica attacks him from behind.[28]

After defeat of Armadillo and Insectile, Clare urges everyone to aid Miria.[29]

But Miria decapitates Dreadlock. After battle, Tabitha carries Yuma, who lost her arm. In the first engagement, the battle group manages to kill all three scouts without a single loss.[30]

After the scouts go missing, Isley orders Rigaldo to lead the Northern Army of 27 awakened beings into Pieta.[31]

At this point, manga and anime diverge.

Manga shows death of the Tyrannosaur awakened and the attack on the Stegosaur awakened, but no double-digit warrior deaths.[32]

Anime shows death of Mannequin awakened, as well as those of double-digit Pamela, Yuliana, Carla, Claudia and [Eliza]].[33]

During battle, Rigaldo counts the loss of three awakened versus five Claymore warriors. He decides to decapitate the battle group leadership.[34]

Rigaldo awakens into the Silver Lion and targets all team leaders. He kills Veronica, Undine, Flora and wounds Jean and Miria. Meanwhile, the Northern Army fights remaining 15 warriors, minus Clare, Helen and Deneve.[35]

Clare goes berserk, awakening her legs so she can match Rigaldo's extreme speed. As the battle rages on, Clare finally kills Rigaldo by awakening her arms.[36]

The awakened Clare is out of control. She orders Helen to euthanize her. Despite Jean's severe wound, she manages to realign Clare back to normal, but dying in the process.[37]

Though Rigaldo is dead, only six warriors are able to stand and fight. Tabitha and Yuma are too injured. The other warriors are dead.[38]

19 warriors are shown confronting the Northern Army, which disappears. Rigaldo shows up and awakens into the Silver Lion. He kills Veronica, Undine, Flora and wounds Jean and Miria. Clare goes berserk and attacks.[39] 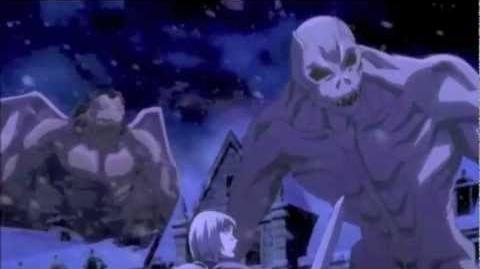 She awakens only her legs. When Rigaldo captures Miria, Clare cuts off his arm.[40]

She eventually hacks Rigaldo to pieces.[41]

After Rigaldo's death, Clare asks Helen to euthanize her, but Priscilla appears and a new fight begins. Meanwhile, Raki is galloping on a horse toward Pieta.[42]

The fight continues with Clare pursuing Priscilla into the mountains, where the final showdown takes place in a volcano. Miria, Deneve and Helen follow Clare, while Jean and Raki are not far behind.[43]

When Clare awakens her arms, she defeats Priscilla, who reverts to human form. Raki stops Clare from executing Priscilla. Though Clare cannot control her awakening, Jean sacrifices her life by realigning Clare as in the manga. Isley takes away Priscilla.[44]

Next day after Priscilla's defeat, the fighting has stopped. The fate of 15 Claymore warriors and Northern Army (24 awakened) is not shown.[45]

Miria, Deneve, Helen and Clare decide to desert the Organization. They split up—Miria journeys alone from Alfons, seeking information to destroy the Organization. Deneve and Helen journey together to some unknown destination. As do Clare and Raki. Anime series ends here.[46]

Lobster awakened, who appears to lead army, challenges the twins.[48]

Galatea and Rubel watch Alicia awaken into winged form, while Beth appears to meditate. Galatea speculates that a "Controlled Awakening" technique is being used.[49]

Rubel confirms Galatea's suspicions, explaining how the twins were trained from infancy to be of one mind—in short, a two-person Claymore warrior. Neither twin has any individuality left.[51]

Northern Army of 12 confront Riful and Dauf. Lead by Flame-hair awakened, the group think they are more powerful.[53]

Dauf fires a Yoma rod through the skull of Flame-hair. As Riful and Dauf proceed to kill all of them, she implies that Isley deliberately sent them into a death-trap.[54]

Isley alone confronts Luciela of the South. She repeats Riful's accusation of splitting up his "allies" into weaker groups, which Riful and the Organization easily annihilated.

Isley admits the truth of this. He dislikes sharing.[55] After the 7-year timeskip, Chronos speculates that Isley awakened on purpose to infiltrate and destroy all the awakened warriors of the Initial Male Era.[56]

But before the second engagement (flashback in Scene 66), Miria has the battle group take a half of suppressant pill. If rendered unconscious, their lack of Yoma aura would make them appear dead to both the Northern Army and Organization.[60]

The Organization is defeated by the Northern Army. Only seven Claymore warriors survive. The 7-year timeskip begins here.[61]

Due to the production needs of Abyss Feeders, the Organization now hunt awakened proactively, rather than on request only.[63]