Unofficial name. Unnamed by characters. Actual name, if any, for this Yoma suppression is unknown. The Yoma says that Clare followed the Yoma from places other than Egon.

The young boy from Doga, Raki, wakes up in an unfamilar room. But the inn-keeper, who brings in food, tells Raki that he is at the Egon village inn. And that a Claymore brought him here and paid for his room.[1]

Search for a Claymore[]

Raki assumes Clare rescued him. After bolting down some food, he searches for her. A stranger tells him that a Claymore is looking for him. But that she left town and went into the forest.[2]

In the forest, Raki meets a female in a Claymore warrior uniform.[3] But when she refers to herself as a Claymore, Raki remembers what Clare told him in Scene 1—the Organization warriors never call themselves "Claymores."[4]

The impostor awakens into a Yoma. The Awakened Claymore takes Raki hostage and tells Clare come out of hiding.[5] 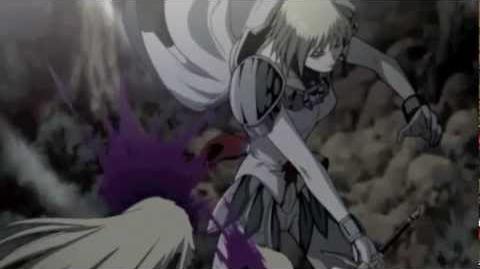 Clare pulls out the decapitated arm. She uses her Yoma power to regenerate and close the wound.[8]

She tells Raki that she only acted to kill the Yoma, not to save him. But she does ask him if the village exiled him. At first he tries to deny it.[9] But Clare has a flashback. As a very young girl, a Yoma impersonating her brother killed her parents, then was about to kill her, when an unknown Claymore warrior decapitates his head.[10]

Overheard adult voices imply Clare was exiled, due to fears she was a Yoma.[11]

Clare asks Raki if he can cook. He says yes and Clare offers him a "job" of being her personal cook, till they find a new home for him.[12]