A black card embossed with a warrior's symbol. The card is enclosed in a black envelope.

Used by the Organization in a system to prevent Claymore warriors from becoming awakened beings.

When a warrior is sent "out to work,"[9] or on the day of a warrior's "inauguration,"[10] she is given a unique symbol to identify her.

This symbol is on the forte of Claymore sword blade, dicky worn over throat, and on the black card, kept in an envelope rolled-up inside the sword hilt.

On finding herself awakening, a warrior sends her card to another warrior. The recipient rendezvous with the sender. Then, the recipient euthanizes the sender.

Sending a black card is usually a sign of trust between friends, as Elena does as she and Clare comforted each other during their painful transformation into half-Yoma.[11] It can prove otherwise, as in Rosemary's case.[12] 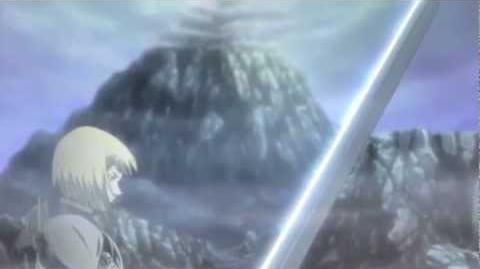