Battle of the North

VIZ Media translates 北の戦乱[13] (Northern War) as "Battle of the North." "Battle" describes events more accurately than "war" or "campaign," since either means more than one battle.

In both the manga and anime versions, only one battle occurs, with two "engagements"—the first with the Organization battle group engaging three scouts, the second with the entire Northern Army—each engagement made up of numerous individual combats.

The Organization mission is actually unnamed in the manga and anime. 北の戦乱 is derived from chapter titles.[14] 北の戦乱 and translated variants are unused by characters.

This event is often called the "Northern Campaign" on reference websites derived from scanlations. A military "campaign" is usually defined as a series of battles. See Notes below on levels of military activity.

Military conflict in the northern region of Alfons, the battle site being the village of Pieta.

After surviving the Witch's Maw, Clare and Jean are found by Rafaela. Rubel says that a deserter like Clare would normally be executed, but the Organization is willing to pardon Clare if she joins the battle group assembling in Pieta.[15]

Her mission: to help destroy the Northern Army, who wiped out the Pieta hunt—lead by No. 7, Eva. Warriors Kate and Lucia were also killed.[16]

In the manga, Rubel also says that Raki was taken north by a slave trader.[17] In the anime, Rubel says Raki traveled north on his own volition. Despite Clare's misgivings, she now cannot refuse.[18]

When Clare and Jean arrive at Pieta, Clare discovers that Helen, Deneve and Miria are alive as promised.[19]

Miria, as the highest ranking warrior, molds the battle group into five teams modeled after awakened hunts. She balances the weak with strong, creating five teams of approximately the same strength (see composition of teams in battle group).[20]

Later that night, Clare and Jean join Miria, Deneve and Helen in a secret meeting in a nearby cave. Miria reveals the truth: this is a suicide mission.[21] 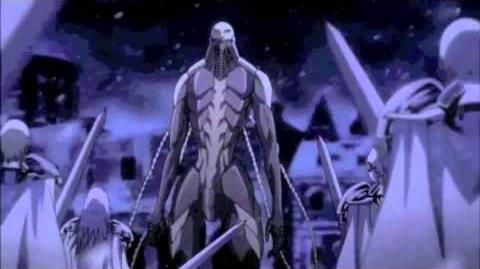 Meanwhile, three scouts from the Northern Army approach Pieta. The meeting in the cave is interrupted by one awakened scout attacking Pieta.[22] In the ensuing battle, the battle group manages to kill the Insectile awakened,[23] then the Armadillo awakened and Dreadlock awakened, without a single loss.[24]

At this point, manga and anime diverge:

In a flashback, Miria holds the last meeting of the battle group in the Eastern Inn banquet hall. She instruct the warriors to take a half dose of suppressant. If rendered unconscious during combat, the warrior's lack of Yoma Energy makes her appear dead to both the Northern Army and Organization.[25]

But Clare cannot stop awakening. She demands that Helen kill her, but Jean intervenes and dies returning Clare to normal.[30] 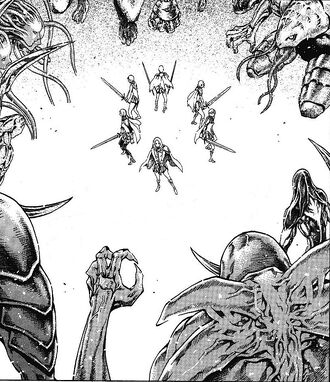 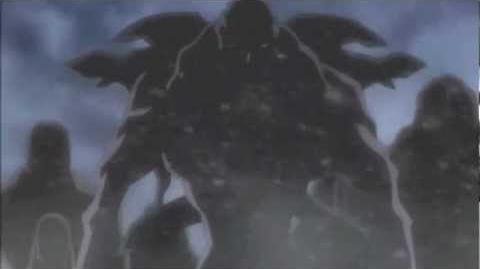 19 warriors are shown confronting the Northern Army, which disappears. Rigaldo shows up and awakens into the Silver Lion. He kills Veronica, Undine, Flora and wounds Jean and Miria. Clare goes berserk and awakens only her legs.[33] She eventually kills Rigaldo.[34]

After Rigaldo's death, Clare asks Helen to euthanize her, but Priscilla appears and a new fight begins. Meanwhile, Raki is galloping on a horse toward Pieta.[35]

The fight continues with Clare pursuing Priscilla into the mountains, where the final showdown takes place inside a volcano. Miria, Deneve and Helen follow Clare, while Jean and Raki are not far behind.

When Miria, Deneve and Helen arrive, they engage Priscilla, but are soon defeated. Clare picks herself up, having flashbacks as to why she seeks Priscilla's death. Clare awakens even further, evolving into a multi-bladed, winged being.

When Clare awakens her arms, she defeats Priscilla, who reverts to human form. Raki stops Clare from executing Priscilla. Though Clare cannot control her awakening, Jean sacrifices her life by pulling Clare back. Isley takes away Priscilla.[37]

Due to the production of Abyss Feeders, the Organization now hunt awakened beings proactively for tissue harvesting, rather than on request only from clientele.[39]

After the 7-year timeskip, the survivors save the Dabi hunt. One hunt member, Clarice, finds the swords used as grave-marks from the Battle of the North.[40] But she only counts 17 swords—seven short of the original 24 warriors. Clarice reports this to Organization. But her report is ignored.[41]

Next day after Priscilla's defeat, the fighting has stopped. The fate of the battle group (15 warriors) and Northern Army (24 awakened) are not shown.[42]

Miria, Deneve and Helen leave Clare and Raki at the volcano. The three comrades split up. Miria plans to live among the civilian population, gathering evidence against the Organization. 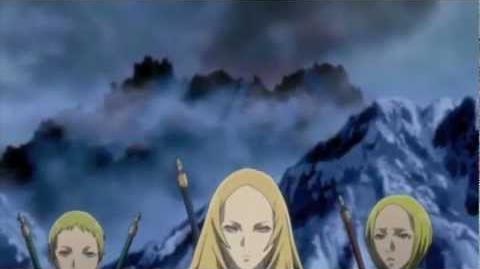 Back at the volcano, Clare grieves at the grave of Jean. Finally, she asks if Raki wishes to accompany her on her life's journey, yet undetermined. Which he does.

As Clare and Raki climb down the volcano, she turns to take one last look. Final iconic image—Teresa's ghost looking at Clare for the last time. The series ends here.[43]