The Claymore battle group or task force is unnamed in some manga translations. In the FUNimation anime, Rubel calls it an "expeditionary force."[10]

The Organization battle group that assembles in Pieta, a village in the northern region of Alfons.

After surviving the Witch's Maw, Clare and Jean are found by Rafaela. Rubel says that a deserter like Clare would normally be executed, but the Organization is willing to pardon Clare if she joins the battle group in Pieta.[11]

Her mission: to help destroy the Northern Army, who wiped out the Pieta hunt—lead by No. 7, Eva. Hunt members Kate and Lucia were also killed.[12]

In the manga, Rubel also says that Raki was taken north by a slave trader.[13] In the anime, Rubel says Raki traveled north. Despite Clare's misgivings, she now cannot refuse.[14]

When Clare and Jean arrive at Pieta, Clare discovers that Helen, Deneve and Miria are alive as promised.[15]

Miria, as the highest ranking warrior, splits the battle group into five teams, resembling awakened hunts, mixing the weak with the strong so all can gain experience (see composition of teams in tables below).[16] 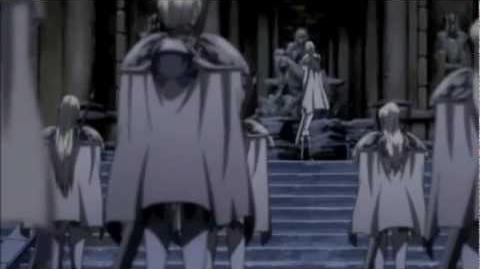 Later that night, Clare and Jean join Miria, Deneve and Helen in a secret meeting in a nearby cave. Miria reveals the truth: this is a suicide mission.[17]

Miria is the group commander.

After the second engagement with the Northern Army, the anime differs from the manga as to the ultimate fate of the warriors.