Or if derived from Alexandros, it may mean "protecting man."

Her nickname, usually translated as "dusteater," can also be translated as "bite the dust," a cliche of of Hollywood Westerns, alluding to both Cassandra's fallen opponents, as well as her technique, in which she attacks at ground level.

In Western literature, "bite the dust" and "Cassandra" first appear in Homer's Iliad. In the story, Agamemnon—leader of the Greeks—promises that the Trojans will "bite the dust." He also makes a Trojan princess—Cassandra—his mistress. His wife, Clytemnestra, kills him and Cassandra. Hence both "bite the dust."

Cassandra is one of three dead No. 1s that Dae resurrects. She has 126 wounds on her body, made by her sister warriors when Cassandra awakened.[13]

A giant muscle mass is covered by a verdigris green shell, shaped like a human female torso.[14] The head and both arms are missing. Tentacles extruding from the pubis and arm stumps enable locomotion in a prone position. Between the breasts, a normal-sized torso emerges. Cassandra's vital core is contained within this "pilot body."[15] 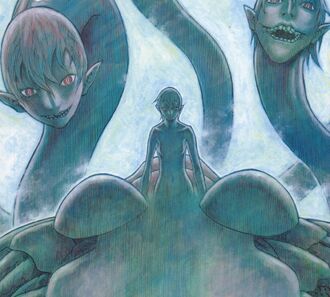 Unknown type. Having no Organization datasheet in the "Yoma War Record," her ability and baselines are unknown. Appears to have high agility baseline.

Cassandra uses the "Dusteater" technique. Feet are anchored in ground as pivot. The head begins bobbing like metronome (inverted pendulum). As the body collapses to ground-level, swinging to and fro, Cassandra's sword swings scythe-like, wide and close to the ground—the blade striking the target's limbs.[18]

This technique efficiently compensates lower base abilities and skills. According to Teresa, she would be able to win every fight on the spot, if Teresa herself were not her opponent.

Cassandra is accosted by an opportunistic warrior, Roxanne.

Roxanne repeats "Black Widow" routine—idolizing a lonely, friendless mentor, imitating her technique and mannerisms. She even copies Cassandra's left handedness. But during sparring matches, Roxanne notices Cassandra did not even measure up to No. 5, Elizabeth. Cassandra keeps her technique a secret—even from Roxanne.[20]

Cassandra comes across a failed awakened hunt. She kills the awakened being, but uses her Dusteater technique. The lone surviving member of the hunt is No. 35. The two becomes friends.[22] 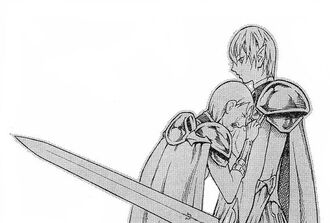 Later, No. 35 dies on another failed hunt that Roxanne leads.[23]

At Organization Headquarters, in a room crowded with warriors, Cassandra brings the head of an awakened.[24]

Roxanne provokes Cassandra into attacking. Cassandra uses her Dusteater to hack her way to Roxanne. Limbs of the other warriors fly about.[26]

After an Executive meeting, Dae gets permission to resurrect Cassandra, Hysteria and Roxanne.[28]

Later, during the Claymore Rebellion, Dae releases the resurrected No. 1s. During the engagement between the warriors and Abyss Feeders, the three No. 1s cut down everyone en masse.[29]

When Cassandra tries to deliver the coup de grace to Audrey, her sword aim is diverted. Unknown to her, Rafutera is altering her movements.[33]

Possibly due to Rafutera's probing, Cassandra remembers her past, causing her old wounds to reopen.[34]

In a flashback, Cassandra remembers saving the life of No. 35. After they become friends, No. 35 is assigned to an awakened hunt lead by Roxanne. But Roxanne deliberately allows the target to kill No. 35.

As Cassandra remembers her past, she awakens into a huge prone, humanoid form, with tentacles supporting the body.[35]

Cassandra sends out hydra-like tentacles, ending with human heads that strike the ground. Roxanne is ecstatic. She attacks Cassandra.[36]

But Cassandra bites off Roxanne's limbs. Soon the limbless torso of Roxanne awakens.[37]

Roxanne has a metallic robot form, with skeletal arms and fern-like wings patterned on Roxanne's faulds. Roxanne picks up a wounded Claymore warrior to eat. But a Twin cuts free the warrior.[39]

When Roxanne tries to capture the Twin, Cassandra interferes. The combat between the two awakeneds begins.[40] 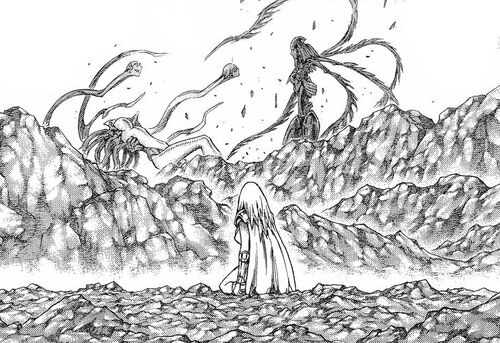 Cassandra continues eating as she combats Roxanne.[41] Despite the proximity of the Hysteria-Miria dual, Cassandra and Roxanne fight on, oblivious to the other combat. Roxanne launches her blades at Cassandra.[42]

Wounding Cassandra, there is a lull in the fighting as Roxanne steps on Cassandra's face.[43]

Miria is losing the fight, but doggedly lures Hysteria into position. Cassandra dares Roxanne to use up her blades. Just before Roxanne launches her final volley to finish off Cassandra, Miria touches on Anastasia's cord of hair,[44] then launches herself at hyper-speed past Hysteria, leaving Hysteria at ground zero.[45]

Hysteria pursues Miria, who flees across the sky before Roxanne's final volley.[46]

Catapulted by the Yoma energy of eight comrades, transmitted by Anastasia's hair cord, Miria stays ahead of Hysteria. In flashback, Miria explains her plan to Deneve.[47]

Back in the present, Roxanne's volley sends blades in all directions. On the ground, Miria's comrades flee the area.[48]

Hysteria, distracted in her pursuit of Miria, is hit by a blade midair, then bit by a hydra-tentacle from Cassandra, who mistook Hysteria as Roxanne.[49]

Though Roxanne discharged two armloads of blades, they prove too little too late. Having spent her blades, Roxanne is now helpless. The hydra-tentacles of Cassandra now completely consume Roxanne.[50]

On the ground elsewhere, the shattered remains of Hysteria barely clings to life.

As Hysteria remembers the face of the smiling warrior, the remaining Yoma Energy inside Hysteria takes over her mind. Hysteria begins speaking like Priscilla, accusing the unnamed warrior of being a murderer. Finally, the Yoma Energy takes the shape of Priscilla.

Miria bounces backs from the shock. Deneve and Helen, also recognizing Priscilla, attack the image, but it is only an apparition, which dissipates. Hysteria is dead.[51]

Cassandra, having witnessed the proceedings, suddenly leaves for Rabona.[52]

Clare fully awakens Ilena's arm and counterattacks with Quicksword. Clare first minces one head, then two, then the fourth. Cassandra attacks with her locomotive tentacles, but Clare minces these too.[54]

In a final lunge, Clare tries to destroy Cassandra's pilot torso, but only damages the awakened body's left breast and the pilot left arm. But Cassandra quickly regenerates her tentacle heads and attacks again.[55]

In the forest, Octavia's party have joined the Ghosts in trying to stop Cassandra. When the headed tentacles of Cassandra's attack, everyone dodges. When one tentacle tries eating Octavia's comrade, the head suddenly protrude with blades from inside, then bursts apart.[56]

The awakened that lands on the ground looks like a ninja death star with folding blades.[57] The robotic torso resembles Roxanne's awakened form.[58]

Still another head is lassoed by the awakened Iron maiden, who splits opens an Anglerfish-like orifice lined with teeth. The lassoed head is pulled in and the orifice shuts. [60]

Still another awakens into an avian raptor form. But they all fail to stop Cassandra.

Octavia takes matters into her own hands—she herself awakens into a variant of a centaur. With her long dark hair and pilot torso "riding" a Yoma-like horse, she appears like a demonic Lady Godiva. She uncoils an arm—a double-helix of Yoma tissue strips—and flails Cassandra and the surround landscape. The Ghosts flee in terror.[61] But Octavia finally stops Cassandra, who is now surrounded by the awakeneds.[62]

Back in the hills, led by Tabitha, Cynthia and Yuma sense that Cassandra is has stopped. They now try align their Yoma energy with Cassandra's, using their collective resonance to bring Cassandra's consciousness to the surface and break the mental hold Priscilla has over Cassandra.[63]

A member of Octavia's party, Europa, awakens her arm and attacks the Cassandra with a wire saw-like tentacle. Cassandra's leg is sectioned apart.[64]

At a distance, the Ghosts watch the fight between Octavia's party and Cassandra. Helen thinks Miria's plan is working—drawing out Cassandra's sense of self—but Miria senses something is wrong. Deneve believes that after the combat here and the one between Priscilla and Riful's daughter are over, the survivors would be near death. Helen says that the Ghosts can pick off the survivors one-by-one.[65]

But Miria is still uneasy. As is Clare, who senses that the winner has already emerged inside Cassandra's body.[66]

From the hills, Dae and Rubel observe the fight in the valley below.

And Cassandra's consumption of Roxanne further augmented Priscilla's power over Cassandra, possibly to the point where Cassandra is now a separate part of Priscilla. When she absorbs Cassandra, Priscilla will further rejoin her old arm and become the most powerful awakened ever. [68]

The fight with Cassandra suddenly stops. Octavia's party and the Ghosts watch surprised as Cassandra stands upright. The pilot torso on the awakened body begins to sprouts wings.[69] 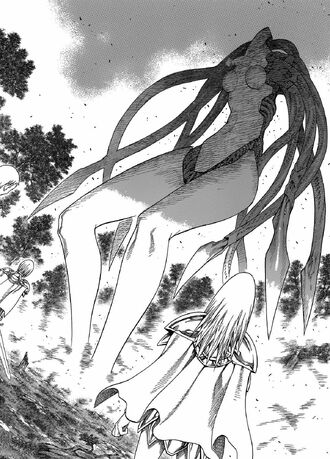 Cassandra's tentacles spin like a String trimmer as they mow down the surrounding forest and members of Octavia's party. Miria orders a retreat. Clare jumps above the tentacles of Cassandra, whose pilot body is plainly Priscilla's.[70]

Octavia and her remaining comrade are dismayed at the failure of their attack. Helen thinks only two members of Octavia's party have survived. But Chronos corrects Helen and throws Europa's still-living head near the Ghosts.[71]

Chronos concedes that he and Lars must join the fight. Lars identifies Europa and describes her special technique—feigning death. As Europa fully awakens, Chronos reveals her moniker, “Europa the Sloth.” He points out that Europa is the only one present that is close in power to an Abyssal.[72]

Both Chronos and Lars awaken, revealing similar biped forms. They join the assault on Priscilla–Cassandra, as do Miria and Clare. The three female and two male awakeneds weaken Priscilla–Cassandra enough for Clare to attack. She eviscerates the thorax of Cassandra's body.[73]

The old Cassandra pilot torso returns, as does Cassandra's sense of self. Helen notices that Cassandra is not moving as slowly as before. Miria suspects that they are seeing the real Cassandra for the first time—under Priscilla's spell, Cassandra's movements were restrained. But by destroying the Priscilla pilot torso, Clare inadvertently unleashed Cassandra's true power.[74]