The キャリア kyaria (carrier) is unnamed by characters in the manga and anime. The sword carrier is only named in the avex Claymore DVD booklets.

Between the shoulder blades, an ambidextrously slotted sword "carrier" is mounted against a metal plate—the back-half of the "clamshell" holding up a shirt around the shoulder area.[3] 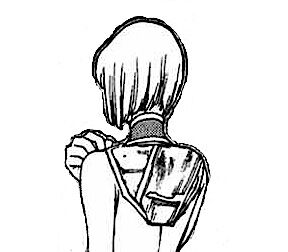 Sword hook on back plate

The back plate protects the warrior from being cut by her own sword when sheathed in the carrier. When sheathed, the sword enters a carrier slot and is secured inside by the sword hook on the back plate.

The carrier and plate also serve to protect the spine between the cervical and thoracic sections against external attack.

). A cape is attached to the horns of the carrier.

As with most parts of the Claymore uniform, there is much variance among individual carriers, possibly indicating each warrior's preference. Some are heavily built, as with those of Undine and Clare. Others are of medium construction, as is Veronica's. The carriers of Miria and Roxanne appear lightly built.

In place of a carrier, the Initial Male Era uses a hook.

Similar to the hook on the back plate of the female generations, the Claymore sword is held by one of two hooks attached to the back brace, which is part of the buckle and spaulders array.[5] 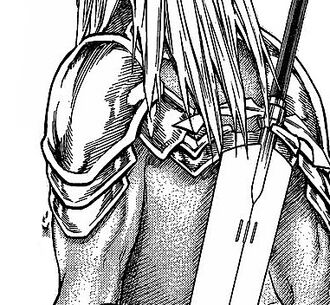 Sword hooks on back bracket

With the female First Generation, the carrier appears. Protruding from the carrier are a pair of horns on which the cape is attached.[6] 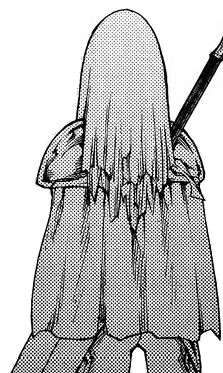 Retrieved from "https://claymorenew.fandom.com/wiki/Carrier?oldid=59793"
Community content is available under CC-BY-SA unless otherwise noted.