The FUNimation anime names the character as the "Awakened Claymore" in the voice actor credits, implying that the Yoma is a former Claymore warrior. Early in the Claymore series, warriors awoke to become Yoma only. The concept of awakened beings was later introduced in the Slashers arc.

The manga version of this character is depicted as a Yoma using a Claymore uniform as a disguise. No official VIZ Media name.

Over the waist-length hair with bangs on forehead. Slender female human body with narrow waist and long legs.

Old Generation uniform being worn during the Current Generation. Anomalies include missing dicky on neck, no vambraces on arms and missing Claymore sword.[2] A multi-plate buckle holds 2-layer spaulders on the shoulders. The second layer appears mostly cut away, creating a outer ring along the spaulder rim. 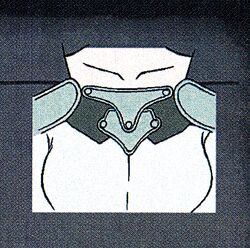 Typical Yoma appearance. In the manga, Clare refers to the Yoma as a male.[3] In the anime, the Yoma is voiced by actresses and presented as female.

The Yoma displays a superiority complex common to all Yoma-entities. He/she underestimates Clare.

Early life unknown. FUNimation credits lists the character as an awakened Claymore, though the character is missing the dicky, sword and associated symbol.

Raki is exiled from Doga after the death of Zaki. He collapses in desert during a dust-storm. The silhouette of a Claymore warrior watches in the distance.[4]

On the wooded outskirts of town, Raki meets someone in a Claymore uniform. But when she refers to herself as a Claymore, Raki realizes she is an imposter.[6]

The "Claymore" awakens into a Yoma. Then takes Raki hostage. She demands that Clare show herself. When she does, the Yoma orders her to throw away her sword.[7]

From the subtext of the Yoma's dialogue, Clare has been tracking the Yoma for some time.[8] Unknown where the order Yoma suppression originated from.

When Clare throws the sword over a cliff, the Yoma punches her arm through Clare's abdomen. But Clare jumps off the cliff, carrying the Yoma with her.[9]

At the cliff's bottom, Clare grabs her sword and cuts off the Yoma's arm, then skullcap.[10]

Retrieved from "https://claymorenew.fandom.com/wiki/Awakened_Claymore?oldid=60312"
Community content is available under CC-BY-SA unless otherwise noted.