Unnamed by the characters in the manga and anime. Name derived from armadillo appearance of the character's awakened form.

Hairless, emaciated man of indeterminate age. He wears a blue monk's cowl in the anime.

An amalgam of various species—a a flexible, armadillo carapace that gives both agility and protection, a retractable snapping turtle head, and a long monitor lizard tail. Also has porcupine quills. 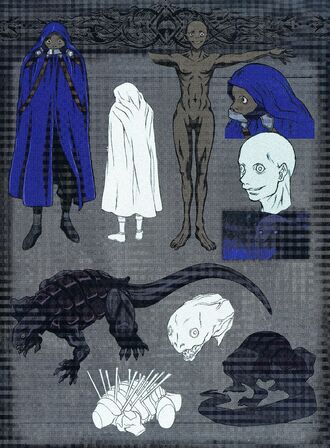 Unknown type. Having no Organization datasheet in the "Yoma War Record," his ability and baselines are unknown. Appears to have high Yoma power and hardness baselines.

Extensible quills extrude from the carapace to attack.

Early life unknown. One of three scouts for Northern Army.

Three men approach Pieta—scouts for the Northern Army. The blind-folded scout senses the presence of the Organization battle group—24 Claymore warriors. The bearded scout disobeys orders and attacks ahead of the army. He awakens into the Dreadlock awakened.[2]

He shoots tentacles into the village. Tentacles anchored, he catapults himself hundreds of meters. He lands downtown and attacks the villagers.

They attack the still unawakened scout on the roof. But his technique, resembling Galatea's, is more powerful. He causes Flora's sword to miss, then forces Carla to attack Flora.[4]

Clare realizes what is happening and kicks Carla away. The scout then seizes control of Flora, Lily, Wendy and Clare, dropping them to their knees on the rooftop.[5] As Carla is about to execute everyone, Clare asks Ilena's arm for help. The arm, independent of Clare's volition, shatters the roof, toppling everyone to the floor below.[6] Flora finally strikes him. But he escapes and awakens into the Armadillo awakened.[7]

Teams Flora and Undine advance on Armadillo. But extensible quills spring out in all directions, bringing down six warriors. The four still standing—Flora, Undine, Deneve and Clare—attack, but his armor is too tough.[8]

He uses his Yoma power to make Undine cut her throat, but succeeds only in cutting her cheeks. But then he tries to awaken her by surging her Yoma power. Undine begins to awaken.[9]

Deneve kicks Undine back to safety.[10]

Deneve and Clare charge. Clare lets her arm go berserk, Armadillo unable to control the uncontrollable. He spring out his quills, spearing Deneve.[11]

Deneve breaks free and regenerates her wounds. She almost beheads him. But she cannot cut through his neck. Undine, with her Twin Sword technique, pushes Deneve's sword through.[12]

Disembodied head escapes, while trying to awaken Wendy and Yuliana. But Flora and Clare mince the head midair.[13]

Retrieved from "https://claymorenew.fandom.com/wiki/Armadillo_awakened?oldid=59513"
Community content is available under CC-BY-SA unless otherwise noted.