Flashbacks—Clare and Teresa in Teo, Clare picking up Teresa's head on the plateau.

Flash forward to Clare searching in village. She spots Rubel. Outside of town, she demands that Teresa's flesh and blood be put into her. See video below.

Flash forward to the present. Clare as a Claymore warrior—she kills a Yoma.

Miria (No. 6), Queenie (No. 20), and third unnamed warrior, intercept a Yoma pursuing a girl. Miria cuts off his skullcap. When they enter Toriro, they find that Clare killed four Yoma (five in the manga).

Miria says an Voracious Eater could have been present. And that Clare disobeyed orders, since she was to wait till everyone arrived (Queenie's manga lines given to Miria in the anime).

Rubel tells Clare that the Voracious Eater in Rabona was only an above average Yoma. He reveals that a real "Voracious Eater" is an Organization codeword for an awakened being—an awakened Claymore warrior. When he asks what if Clare met a real Awakened Being, but he takes it back since that is what Clare was hoping for.

He suggests that Clare give up the idea of killing Priscilla. But he assigns her to the Paburo hunt. 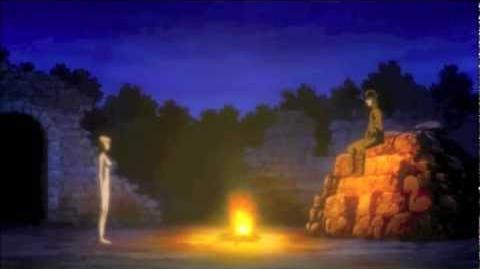 Two weeks later Clare and Raki appear in a Paburo city. There they are met and led by a Man in Black, Ermita. He leads them to a house. Inside a darkened room, the other three hunt members nap.

Clare again meets Miria. The other two hunt members are Deneve (No. 15) and Helen (No. 22). Helen ridicules Clare for bringing Raki. Miria breaks up ensuring fight. During the introductions, Clare reveals her number as No. 47, the weakest of the Organization warriors. This brings mirth from Helen and Deneve.

At an inn, Clare leaves Raki. Then joins the hunt. They travel through the rain to the Paburo Mountains.

Clare dreams of the figure of Teresa, sword-fighting.

Clare wakes up, only to find the party ready to leave. She follows them farther into the mountains. They walk a trail on a canyon terrace. Surrounding waterfalls plunge into the river below.

Ahead of them, an unknown man greets them. He claims to be from Lido and is the client who made the original request to the Organization. He offers to guide them to their destination. Inexplicably, Miria attacks him, but he dodges her sword. He appears on the canyon wall above them and morphs into the Paburo awakened. He wounds Miria, who says they were misinformed on the strength of their target. 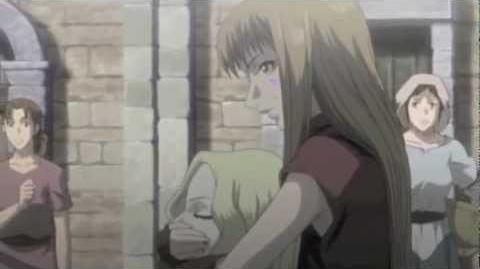 Retrieved from "https://claymorenew.fandom.com/wiki/Anime_Scene_9?oldid=57320"
Community content is available under CC-BY-SA unless otherwise noted.