Nighttime. Inside a guarded cathedral, a priest find the bloody corpse of a fellow priest lying before the altar. He collapses then screams.

The next day in a church tower room, three priests hold an emergency meeting. Father Vincent tells Fathers Pario and Serene that unless they send for a Claymore warrior, all the priests are doomed. Despite the official ban on Claymores entering the city, Vincent makes his decision.

In an evening forest, Rubel gives Clare her new assignment—a combined covert operation-Yoma suppression. Infiltrate the Holy City of Rabona to locate and kill a Yoma. Then leave as quietly as she came.

Since Rabona bans all things "unnatural"—including Claymores—Clare must hide her identity. Rubel gives her suppressant pills to revert her silver irises to a normal color. The downside is that her ability to sense the aura of Yoma-entities is lost.

Rubel says that by Raki posing as her younger brother, it will add further verisimilitude to her disguise.

Clare and Raki check in at a local inn. Clare uses the cover of an art dealer traveling with her younger brother. Raki inexplicably carries a statue of the Runoa goddess wherever he and Clare go. 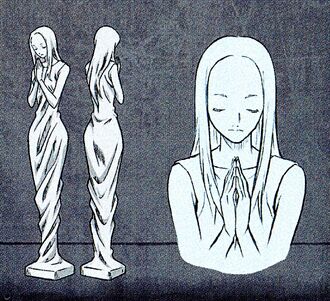 Later, they visit the cathedral. In the baptismal chamber, she meets Vincent. During the baptism, Clare reveals her identity. Shocked, Vincent requests she meet him at night in the tallest belfry.

After dinner, Clare leaps amid the rooftops of the city. She meets Vincent in the belfry tower. He explains how priests are being murdered, nearly breaking down in the telling. Before leaving, Clare asks him to take care of Raki should she be killed. He consents, embarrassed that Clare is more concerned for the welfare of the boy than herself.

While Clare travels back to the inn, two guards, Galk and Sid, intercept her. Despite their strength and skill, she deflects their attacks and escapes. Meanwhile, inside the cathedral, two guards are killed by the mysterious Yoma. 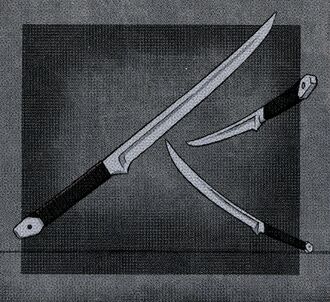 The next morning, Raki awakes and warns Clare that her eyes are silver again. She takes her suppressant in time. City guards, lead by Galk and Sid, barge into the room. They question Clare's whereabouts last night. Sid suspects Clare is a Claymore warrior. But Raki distracts Sid with histrionics. Despite this, Clare warns Raki that if Sid had beaten him, she would not have interfered. She further warns him not to get too emotionally involved with her.

Later, Clare meets Vincent again in the tower. She tells him she suspects a Voracious Eater is the culprit.

Leaping among the rooftops, Clare heads for the cathedral. Galk and Sid intercept her again. But this time they are better prepared. While deflecting their attacks, her identity is revealed. A scream. Clare races inside the cathedral. Another guard is killed.

The Yoma attacks from behind. She dodges him. Galk and Sid arrive. Clare tries to protect them, but is wounded by the Yoma.

Galk and Sid attack, but the Yoma repels them both. Clare stabs the Yoma's eye with a dagger. The Yoma pulls out the dagger and counterattacks. Extensible claws nearly pierce Galk. But Clare pins the Yoma's arm, saving Galk's life.

Then the claws pierce Clare.

Retrieved from "https://claymorenew.fandom.com/wiki/Anime_Scene_3?oldid=57227"
Community content is available under CC-BY-SA unless otherwise noted.