Flashbacks—cavern reunion of the Paburo hunt, Deneve and Undine in the storeroom, Flora challenging Clare, Clare at the inn waking to Northern Army's approach.

Rigaldo leads the Northern Army into Pieta. In a flashback, he and Isley discuss the best plan of attack. The five Claymore teams are shown hidden throughout the village, waiting in ambush. But awakened beings strike first.

Pamela of Team Veronica dies first when an awakened breaks into the building the warriors are hidden in. On a rooftop, a winged awakened bursts out through the attic and kills Yuliana of Team Undine. Carla of Team Flora is the third. Claudia of Team Undine is fourth. And Eliza of Team Jean is the fifth.

In a rooftop chase Lily and Wendy lure the Stegosaur awakened into an alley, where Flora and Clare mince him apart.

Rigaldo observes the battle from a cliff. He senses the deaths of five Claymore warriors and three awakened.

He realizes the strategy the battle group is using—small teams, working independently when possible, yet together when necessary. Further he senses the five strong auras of the team captains.

As Raki follows Isley on horseback, Raki notices that Priscilla is gone. Raki search on foot for Priscilla. He comes across a fleeing woman, who screams about a monster.

In a cavern, Raki finds a naked Priscilla, feeding on a man's body. Raki nearly beheads Priscilla. When he tries to stop Priscilla from eating, Isley explains that Priscilla is an Awakened Being. 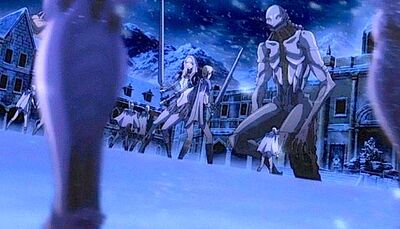 The Northern Army suddenly retreats. Rigaldo appears in town. He awakens into the Silver Lion. He cuts Veronica in two. Then kills Undine. 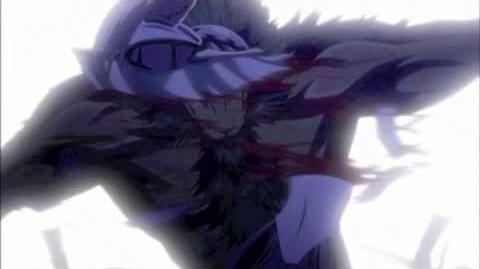 Meanwhile, in the cavern, Raki tries to stop Priscilla from feeding on the human body. He is about to behead her, but stops himself.

Rigaldo continues his decapitating the battle group leadership. When Jean misses him with her powerful but slow Drill Sword, he punches her through the abdomen and casts her aside. Then he splits Flora in two. With three team captains dead and one wounded, he pursues Miria.

Retrieved from "https://claymorenew.fandom.com/wiki/Anime_Scene_21?oldid=57330"
Community content is available under CC-BY-SA unless otherwise noted.