In the sandstorm-swept village of Strah, Clare kills two Yoma. She spots a Winged Yoma escaping. She uses a thrown sword technique, hurling her sword skyward. It pierces the Yoma and he plunges to earth.

As Clare and Raki travel through the desert, he admits being hungry. Clare slings her sword backward and kills a lizard.

That night, they camp at an oasis. Raki cooks the lizard over a campfire. Clare only takes a few bites of lizard leg, then leaves to meet her field agent, a Man in Black named Rubel.

He brings a new shirt and leggings to replace the damaged one. He examines Clare's wound—and by implication—warns Clare about exposing her stigma to Raki. Before he leaves, he gives Clare a black card. She recognizes in horror the symbol's owner.

Resigned to the inevitable, Clare returns to camp. She tells Raki they will journey to Mount Shire.

Daytime. Clare and Raki reach the mountainside village of Shire. At an inn, Clare attempts to keep Raki there, until she returns from Mount Shire.

After she leaves Raki in the lobby, a cowled Rubel speaks to Raki from atop the staircase. As he climbs down, Rubel warns Raki about continuing to accompany Clare. He reminds Raki that Clare is part Yoma.

When Raki asks how Clare can survive with Yoma inside her, Rubel replies that Claymores fight the Yoma inside them with their remaining humanity. But with each fight, all warriors eventually become Yoma. Then they are "euthanized." Raki interprets this as Clare going to the mountain and becoming a Yoma. He rushes out the inn to catch up with Clare.

The entire mountain is covered with ruined churches and graves. As Clare ascends a walkway through a cemetery, Raki catches up. Under Raki's probing, she finally admits the purpose of their journey—to euthanize a sister warrior. 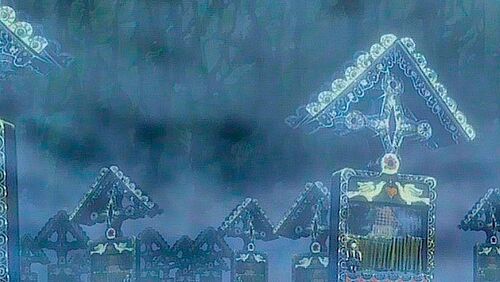 Clare reminisce about her only friend at the Claymore warrior school. The dormitory has the appearance of a medieval prison, lit with chandeliers from the cavern ceiling. In their dorm cell, Clare and her classmate had to cling to each other on their cot in order to sleep, so great was the pain from the Yoma implantation. 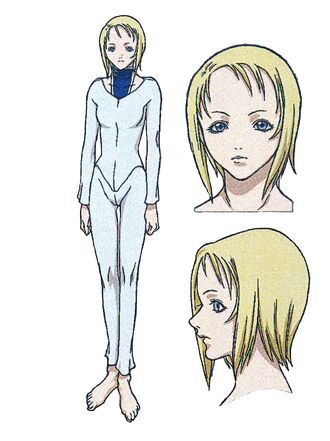 Studio profiles of Elena as a trainee

Clare outlines the black card system. She pulls out the sword pummel and takes out a black envelope. She explains how eventually, all warriors are taken over by their Yoma-half. Soon atop the mountain, they meet Elena, Clare's only friend in the world. Elena reveals that despite becoming a warrior after Clare, Elena unexpectedly awoke first.

Elena barely holds back from awakening. Despite Raki's protests, Clare strikes with her sword. Elena thanks Clare for allowing her to die as a human. 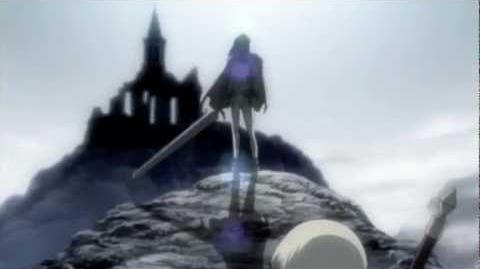 Clare and Raki stand before Elena's grave, her sword serving as her grave-mark.

Retrieved from "https://claymorenew.fandom.com/wiki/Anime_Scene_2?oldid=57328"
Community content is available under CC-BY-SA unless otherwise noted.