Flashback from Anime Scene 17—in the northern region of Alfons the Pieta hunt, lead by Eva, is being attack by awakened beings. Lucia cries out that Kate is down. Then Lucia goes down herself.

In a forest, Jean continues to follow Clare, much to Clare's chagrin. Suddenly, Rubel steps out of the shadows. As does warrior No. 5, Rafaela.

Rubel warn Clare not to engage Rafaela, who can easily take on both her and Jean. Then he begins to state the purpose of this unusual meeting. In the northern region of Alfons, No. 7 and the hunt she lead was wiped out.

As a result of this emergency, the Organization is prepared to give Clare a pardon if she joins a battle group assembling in Pieta. Their purpose is to destroy the awakened beings responsible for the disaster.

As a further incentive, Rubel adds that a boy fitting Raki's description was reported heading up north. Clare can either join the battle group, or remain south. But the Organization can find and execute her at anytime. The choice is hers.

Beginning of the north[edit | edit source]

Back in uniform amid the snowy streets of Pieta, Clare gives up on discouraging Jean's persistent stalking. In exasperation Clare tells Jean to do whatever she wants.

Clare is then surprised by an attacking warrior—Helen. Jean takes the mock assault seriously and counterattacks, sending Helen into full retreat. But Deneve stops Jean from advancing and suggests Jean mind her own business. But soon apologies and self-recriminations go around. 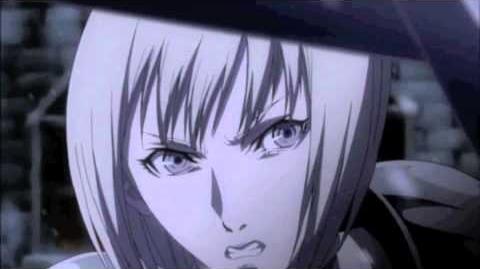 Miria makes her appearance, addressing the warriors from the portico of the church in the plaza.

When the warriors are frightened by the reported presence of awakened beings, Undine ridicules them. Deneve makes uncomplimentary remarks about Undine, leading to a quarrel, which spreads among the other warriors. A riot is brewing. Before Miria can act, Flora demonstrates her Windcutter, frightening the battle group into silence.

Miria divides the 24 warriors into five awakened hunt-like teams—Miria, Flora, Jean, Undine and Veronica leading as team captains. Each team is to concentrate on a single Awakened.

Some portraits below are from the manga.

Clare meets Miria, Deneve and Helen in a cavern. The former members of the Paburo hunt touch swords, confirming their previous oath to survive and meet again. Jean as her wont has followed Clare to the cavern and joins the group of the half-awakened. After Clare recounts the events between the Paburo hunt and Riful of the West, she asks about the chances of Miria's plan succeeding.

On the outskirts of Pieta, three men approach—scouts for the Northern Army. One scout sense the presence of 24 Claymore warriors. The bearded scout awakens into a Dreadlock awakened, despite orders to the contrary. He shoots tentacle into the village. The tentacle anchored into the buildings, he reels himself into the village. 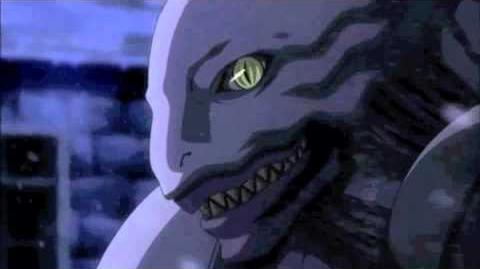 In the plaza, he attacks the surprised villagers. He captures a young girl, but Miria severs his tentacle.

The battle group breaks up into teams and counter-attacks. Team Flora attacks one scout atop a roof. He uses a technique similar to Galatea's Yoma Energy Alignment and Control. He brings Flora, Lily, Wendy and Clare to their knees on the roof. Then maneuvers Carla to kill her teammates.

Clare calls on Ilena's arm for help. The arm, independent of Clare's volition, shatters the roof, toppling everyone. The scout awakens into the Armadillo awakened.

Jean is the last team member standing up against the Insectile awakened. But Team Veronica moves in for support. Elsewhere in the village, Team Undine rescues Team Flora from destruction. 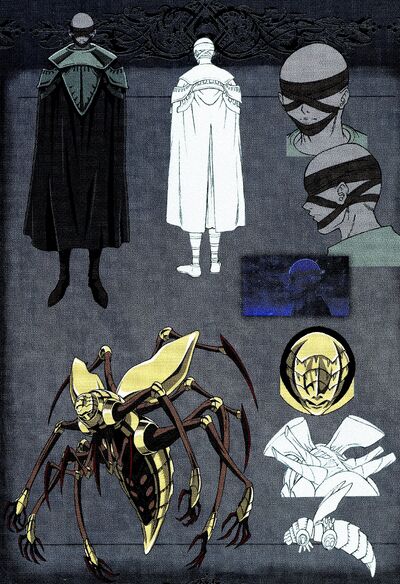 Retrieved from "https://claymorenew.fandom.com/wiki/Anime_Scene_18?oldid=59353"
Community content is available under CC-BY-SA unless otherwise noted.