Flashback from Anime Scene 10—the defeat of the Paburo awakened. Back in the present, Deneve lies critically wounded and is unconscious.

In the unnamed city, Raki looks out from the bedroom window toward the Paburo Mountains, worrying about Clare.

In the mountains themselves, Galatea reports that the Awakened Being is dead, which surprises Ermita. Galatea is surprised in turn by his disappointed reaction. She also cannot read the aura of a fourth warrior, meaning that she is either very weak or dead.

On the canyon terrace (now depicted as a narrow ledge), Miria asks everyone if they ever awakened. And if they ever caused trouble for the Organization. Miria emphasizes that she needs an honest answer from everyone. Clare admits doing both. As does Helen, who also confirms the same for the unconscious Deneve.

Miria speculates that everyone was sent here to be disposed by the Awakened Being. Clare is skeptical about Miria either "giving in" to awakening, or being a troublemaker. 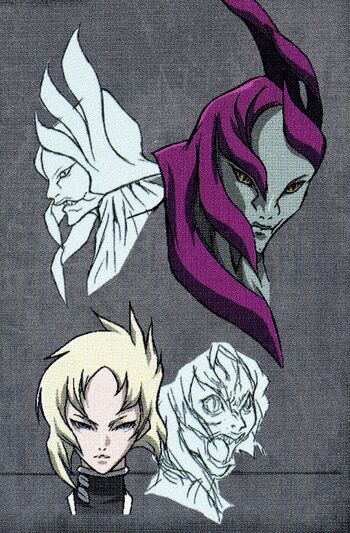 Miria relates that during her third hunt for an Awakened, she discovered a terrible secret.

In a flashback, Miria leads the hunt at night in the mountains. They charge a rooster-like Awakened. Miria uses the Phantom to dodge the attacks, then amputates an arm and both legs. The Awakened topples. As Miria is about to deliver the coup de grace, the Awakened reverts to human form. It turns out to be her old friend, Hilda.

In her grief, Miria nearly awakens herself. Witnessing Miria's awakening is an unidentified Ophelia, who was now appears on the scene. She eagerly awaits killing an Miria and urges her to finish awakening.

But Miria was able to return to normal. But she became marked by the Organization afterward. Owning to being turned into a Claymore with no future, Miria decided to destroy the Organization. When Clare asks Miria what has happened to them, Miria replies that everyone is already awakened.

Galatea reports that the strongest aura said something that disturbed the middling aura and the two are arguing. And that the weakest aura is trying to appear undisturbed—she emotionally shut down due to a tragic incident in the past. Ermita is impressed by Galatea's performance.

Helen protests the idea that she is an Awakened Being that eats human flesh. Miria then tones down her original assertion and now says they are "half-awakened."

While no one was looking, Deneve regained consciousness and overhears the conversation about awakening and returning to human form. Near death, she decides she has nothing to lose by awakening and healing her wounds. Should she not be able to return, Helen and Clare are to euthanized her. They stand ready with their swords as a vortex of Yoma power swirls from the awakening body.

Yoma power explodes. When vapors dissipate, Deneve has closed the puncture in her abdomen.

Miria advises everyone to behave themselves, while she investigates the Organization. While everyone present should be able to handle most Claymore warriors, she also warns about avoiding the top five single-digits. She draws their symbols on the canyon wall: No. 1 Alicia, No. 2 Beth, No. 3 Galatea, and especially No. 4, Ophelia, who lives to kill Awakened Beings. Finally No. 5, Rafaela. Miria adds that there is a big jump in power between No. 5 and 6.

As Ermita and Galatea leave the mountains, she thinks about the Paburo hunt. Her last thought is "They're walking a very dangerous path."

Back in the city, the inn-keeper tells Raki that he never saw a Claymore go into the mountains and come back alive. Raki insists on waiting outside for Clare, who promised to return. In the setting sun, she finally appears walking up the street.

Retrieved from "https://claymorenew.fandom.com/wiki/Anime_Scene_11?oldid=57215"
Community content is available under CC-BY-SA unless otherwise noted.