Beyond Paburo Mountains, Ermita orders Organization's Eyes, Galatea, to use her Wide Area Sensing to observe the fighting.

The combat on the canyon terrace continues. The awakened severs Deneve's arm and pushes her off the edge into the river beyond. Helen counterattacks with her extensible arm, cutting off several of his legs, but he regenerates them.

Suprisingly, Deneve returns to the terrace, her arm regenerating.

Switching between Miria and Ermita, they both reveal that in the beginning, the Organization produced male warriors, but stopped since the males awakened too quickly.

But the awakened says that Miria has not realized something missing in her explanation.

The awakened wounds Deneve through the abdomen, Helen through the back, and inflicts general injuries to Clare. Miria uses her Phantom technique to rescue the fallen warriors. The Awakened's tentacles keep piercing illusions. He realizes the warrior producing the afterimages is the one called "Phantom" Miria. 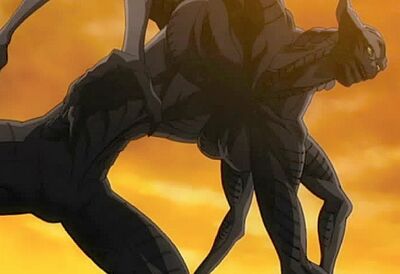 Alone, Miria counterattacks and for a time, avoid capture, but she runs out of energy and is hit by the tentacles. Miria is pinned down.

Clare gets up and uses her sensing ability inherited from Teresa. Though much weaker than Teresa, Clare is still able to anticipate and dodge the awakened's attacks before they happen. She severs all but the legs. But when Clare tries to piece the carapace on the awakened back, she only scratches it.

Clare makes the mistake of releasing her Yoma energy when attacking, but not switching to her sensing mode. She does not anticipate the awakened's next move. He throws her off his back and kicks her into the canyon wall.

Miria manages to get up, despite her injuries. Miria advices Clare to switch between sensing Yoma power in an opponent and using her own Yoma power to enable fighting. Together, Miria and Clare finally kill the awakened. 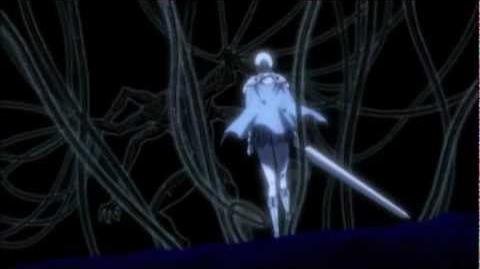 Retrieved from "https://claymorenew.fandom.com/wiki/Anime_Scene_10?oldid=57239"
Community content is available under CC-BY-SA unless otherwise noted.