The name of a famous Russian princess. Also the name of two saints.

Anastasia's uniform consists of a Masonic cross-like buckle[17] that holds 2-layer spaulders on the shoulders. There is no seat plate on faulds skirt. Vambraces cover the forearms up to the elbows.

Sardonic, witty. Unlike warriors like Nina, she likes "that empty, silver world" of Alfons.[18] Also more courteous than predecessor, Nina.

Appears to take little seriously, except the well-being of those under her command, especially the weaker warriors. Under attack, Anastasia is more concerned about hunt members than herself. She does respect Nike's strength enough to let her to stay and fight.

Unknown type. Having no Organization datasheet in the "Yoma War Record," her ability and baselines are unknown. Anastasia's strength baseline does enable her Winged Power ability.

When fighting awakened beings, Anastasia attaches her hair to them and surrounding objects. As the hairs stretch, they form a scaffold, allowing her to bound and "float" midair. Anastasia and other Claymore warriors fill the hairs with Yoma Energy, adjusting the strength.[19] The Winged Technique creates the illusion of flying, earning Anastasia the nickname "Winged."

Anastasia replaced No. 9, Nina, after failure of Dabi hunt, by order of Limt.[20] Captain of replacement team, Anastasia's hunt.

Ghosts and Dietrich head to Organization Headquarters, intending to rescue Miria. But the Ghosts' Eyes, Tabitha, senses four warriors heading in the same direction. The unknown warriors are lead by Anastasia.[21]

Owing to the loss of Alicia and Beth, Anastasia's Hunt is recalled to Organization Headquarters. Anastasia returns with Nike, Keira and Phina on the "Northern Path," a secret route to Headquarters.[22] But they meet a man who awakens.[23] 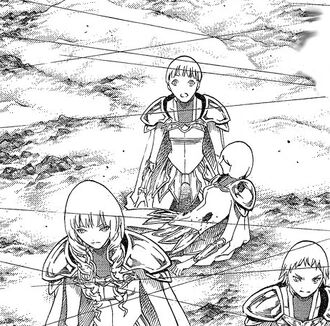 Anastasia defeats awakened being, but other awakeneds attack. Hunt is overwhelmed. Anastasia and Nike surrounded. But Ghosts and Dietrich rescue them.[24]

At Organization Headquarters, Hysteria dodges Miria's attack. Mira further awakens, but is pulled down to earth by Anastasia's hair. The Ghosts and Anastasia's Hunt have arrived.[26]

High above the suspended warriors, Hysteria fires her bladed appendages. Only Anastasia, Helen and Tabitha remain uninjured. During combat, she is stabbed by Hysteria but later is freed by Nike, who helps Anastasia by using the sword stuck in Hysteria's throat.[27]

With a tethered blade, Hysteria hits Anastasia. Holding Anastasia captive, Hysteria promises to spare whoever pulls out the sword.[28]

With no takers, Hysteria is about to lose patience and attack everyone en masse, but Nike volunteers to pull out the sword. But this misdirects Hysteria's attention—Nike cuts free Anastasia, then Deneve and Tabitha grab Anastasia. Nike tries to strike Hysteria, who dodges.[29]

Angered at being tricked, Hysteria pursues Deneve and Tabitha, but Miria rides atop Hysteria and attacks.[30]

Hysteria sheds her corseted, pupal shell, molting into a mosquito form. Cassandra and Roxanne continue to fight on.[31]

Meanwhile, Anastasia weaves together several hair strands into a cord, into which all eight warriors begin to inject Yoma power, with four warriors on each end.[32]

Miria is losing the fight, being wounded repeatedly by Hysteria. But Miria doggedly lures Hysteria into position. Cassandra dares Roxanne to use up her blades. Just before Roxanne launches her final volley to finish off Cassandra, Miria's feet touch on Anastasia's cord of hair.[33] Then Miria launches herself at hyper-speed past Hysteria, leaving Hysteria at ground zero.[34]

Hysteria, distracted in her pursuit of Miria, is hit by a blade midair.[35]

Meanwhile on the battlefield, Anastasia is regenerated by the Ghosts. Soon Miria announces the death of Limt.[36]