Perhaps alluding to her aristocratic bearing.

In the VIZ Media translation, instead of calling the twins the "Black Ones (scanlation)," Rubel says, "Actually, both Beth and Alicia are dark," referring to their black, elastic uniforms.[21]

How to differentiate the twins: Beth is usually gazing downward—sometimes ever so slightly—even when her eyes are open and not in a combat situation.[22][23] Alicia looks straight ahead with or without a target in sight.[24]

Color scheme all-black including the armor. Reminiscent of bat costumes worn by female characters in film, stage and comics since the French film serial Les Vampires (1915).[25]

A shark-tooth-shaped buckle hold 2-layer spaulders on the shoulders. vambraces are worn below the elbow shirt and leggings fabric similar to that worn on the limbs of Helen. Appears to stretch indefinitely.

Riful describes the blades: "Those blades on her arms are lethal. The small ones set on the larger ones are constantly moving at high speed. They slice through everything they touch.[27]

Unknown as to location of Claymore sword, which always reappears when returning to human form. 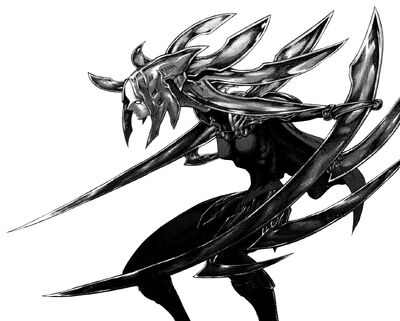 Almost no personality or sense of self. A result of training from infancy by Organization to be of one mind with Beth.

Alicia is completely obedient to Organization. According to Rubel, Alicia seldom appears in her assigned district. As a result, she remains unknown to most warriors, except by name.[28]

Her only close relationship appears to be Beth.

Alicia is a Special type[31] warrior, her ability being Mind Share/Full Release.[32] She can fully awaken, but using a controlled awakening technique, can recover human form.

Controlled Awakening[33] depends on Mind Share, in which one warrior awakens, decanting her human essence into the other, who has Mind Share/Full Control.[34] This allows the awakened one to recover human form, permitting controlled awakenings.

The Organization assesses Alicia as the strongest warrior in Organizational history. Developed specifically to deal with Creatures of the Abyss. Alicia and her twin have been trained to be total warriors, with little or no self-consciousness. Alicia's mind is transferred to sister when fully awakened. Speculated that Alicia has reached Abyssal level.

In an unnamed town near Organization Headquarters, Rafaela overhears two men talking about identical twins being taken by Men in Black from ゼム[35] zemu 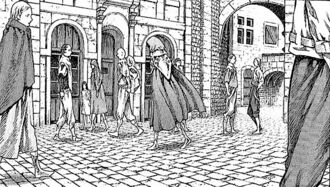 ゼム is an object pronoun, but is often translated as being the proper name of either the twin's father[36][37] or one of the two men speaking.[38][39]

Unknown if "them" are the parents of Alica and Beth, since the Organization collects and trains other pairs of twins since the Luciela debacle. The "Yoma War Record" makes reference to negotiating with families to release their twin girls to the Organization, sometimes under duress.[40]

The original Japanese text, 裏[41] ura (back), has been variously translated as "out back"[42] or even "Hinterlands."[43] Regardless of actual birthplace, it is never stated that the twins were born in the village itself.

Alicia is first mentioned by Miria as warrior No. 1, along with sister Beth as No. 2. Miria warns Deneve, Helen and Clare not to engage.[44]

Battle of the North serves as delaying tactic, according to Galatea.[45] After the Organization's defeat at Pieta, the Northern Army splits in two—12 awakened heading for Lautrec, 11 for Sutafu.

Galatea and Rubel watch Alicia awaken into winged form, while Beth appears to meditate. Galatea speculates that "They share...one mind...?"[48]

Rubel reveals that Alicia and Beth have lost almost all individuality (almost no "self" or intellect), explaining how the twins were trained from infancy to be of one mind—in short, a 2-body Claymore warrior.[49]

On news of Isley's death in Mucha, Limt sends Alicia and Beth to kill Riful.[50]

Then Alicia and Beth land before them. The warriors announce themselves as "Abyss Hunters." And that their target is Riful.[52]

Riful dismisses the twins, saying "You look to me like a couple of ordinary warriors."[53]

But Alicia awakens and proceeds to shred both Riful and Dauf.[54]

Cynthia and Yuma find Beth. Yuma wants to help, but Cynthia holds her back. Both Beth and rod merge into an awakened.[58]

Alicia, reverted to her human form, cut off Riful's arm and leg with her sword. Riful retreats, now able to stand only with help of her hair tentacles.[59]

The awakened Beth and Priscilla meet. They fight.

Priscilla tears off the Claymore warrior torso on the awakened body. She drinks Beth's blood.

But Priscilla loses interest in Beth and walks away. But Beth insists on confrontation.[61]

Alicia, facing Riful and Dauf, suddenly leaves. She joins Beth in her fight with Priscilla. The twins have both awakened.

Stunned, Riful senses the fight already is over.[64]

All available warriors are recalled to Sutafu to protect Headquarters. Three months later, they confront Miria.[65]

Retrieved from "https://claymorenew.fandom.com/wiki/Alicia?oldid=60703"
Community content is available under CC-BY-SA unless otherwise noted.