St. Agatha is a 3rd century saint, usually depicted in Renaissance paintings as being tortured, naked or carrying her excised breasts on a platter.

The Claymore character appears as a demonic inversion of historic saint.

Naked human form only an extension of hair-like tentacles, which attach atop a crustacean body.[15] 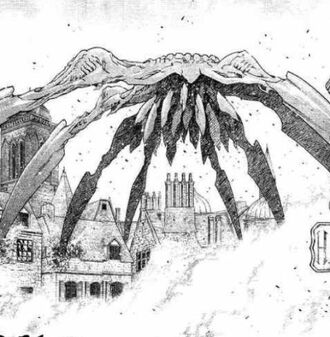 In Chaldean Numerology, the number 2—Agatha's number—is often viewed as the number of evil and misfortune. Compare to Priscilla.

Displays the usual shapeshifting of awakened beings. Agatha shifts her vital core about the awakened body, avoiding damage when attacked. Uses a human form as a decoy. In this, Agatha resembles the Tapeworm awakened.

Sid, after helping Clarice and Miata escape the city guards, takes them to a guardhouse in a cemetery. Inside is Galk's office. Galk says locals have been disappearing and suspects a Yoma. On Clarice's questioning, Sid confirms that a woman of Galatea's description lives in town.

Elsewhere in the city, Galatea says farewell to orphans leaving a neighborhood church. She turns to say farewell to Father Mohr as welll. Clarice and Miata have arrived as expected.[17]

Galatea reveals she released Yoma power, tricking Organization to send execution party. She hoped they would fight Agatha instead.[18] But Clarice and Miata ignore Agatha and attack Galatea. 3-way fight develops as Galatea fights both them and Agatha.[19]

Clare and the Ghosts suddenly appear in town.[22]

They immobilize Agatha by severing her legs. Tabitha uses her Yoma Energy sensing to follow Agatha's vital c as it moves about the false body, then instructs her comrades as to where to strike.

Agatha is forced to abandon her crab form and contracts into a giant mummy—similar to the manga version of Hilda[23]—with tape-like tentacles.[24] As the Ghosts whittle down this second false body, Agatha escapes in her true human form. She takes Galatea hostage. But Clare, per Galatea's suggestion, uses Quicksword to kill Agatha.[25]

Retrieved from "https://claymorenew.fandom.com/wiki/Agatha?oldid=60687"
Community content is available under CC-BY-SA unless otherwise noted.